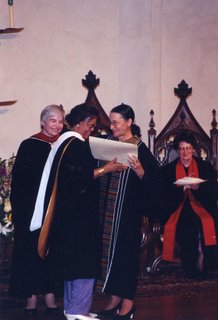 Been thinking about the role these rites and ceremonies play in our lives. Thinking about a letter received recently from a very successful member of my community -- one who is paid thousands of dollars to advise and counsel in financial circles all over the country but who told me with obvious pain how little he feels valued at home.

I thought about any number of local young people's sports teams that have placed at the top of their field in arenas, fields, and courts across the country but were unknown and undervalued where they live and have to fight for the subsidies that are so essential to their continuance.

Except for a perfunctory ritual played out on occasion at city council meetings where little plaques are presented and bows mechanically taken, little heed is paid to all those who bring glory to their community; and there are so many who are so worthy.

Learned recently that former Surgeon General Joycelyn Elders, whose family originally hailed from Arkansas, is the child of World War II homefront defense workers and grew up in North Richmond -- having attended elementary and high schools here in this city. I learned it by sheer accident when going over some vintage photos with a member of a Richmond African American pioneer family who had them in her collection. How could this city not have made some notice of this? Should her picture not be prominently displayed on the wall of Peres Elementary School for every student to see and be inspired by?

This is the city where great bluesmen Lightnin' Hopkins, Jimmy McCracklin, T-Bone Walker and blueswoman Big Mamma Thornton made their big break and elevated the status of this important American music to the top of a cultural revolution in music that had its birth here in this community during the war years. Yet there is no marker to celebrate those contributions. Not a blues club in sight nor in any future plans that I know of.

And, most of all, there is the giant of industry, Henry J. Kaiser, whose innovations in ship-building re-shaped the Bay Area and quite possibly won the war -- yet it took an act of congress to mark this as the place where it all happened and to begin the historic preservation process that is now the Rosie the Riveter/Home Front National Historial Park under development. The city, itself, made little attempt at claiming its rightful role in one of the epochal events of the 20th Century. The structures that now make up the park have lain rusting away for 60 years, awaiting demolition when we could get around to it. They only remained through benign neglect until Congress acted to preserve them for the telling of the story of World War II for the nation.

We're racing against time and the redevelopment agency to preserve those structures still-existing -- before the bulldozers of progress and the giant claw machines begin to replace them with more "rooftops," more "units," cover more ground with concrete parking lots, in the ongoing ritual of covering the past with the unknown future and losing the lessons we so sorely need to learn in the process of city-building.

The practice of taking on only those projects than can pencil out and find completion within the tenure of any current city elected official works against the best interest of the communities they represent. Master Plans that span decades demand a commission (not yet created) charged with long-range planning -- kind of like a mini-supreme court with members appointed with unlimited terms of service. It just might take such a strategy to get Richmond past its life of always hovering on the brink of disaster. Maybe it's the ghost of those 24-hour days when folks slept and worked in 3 shifts and rented out their beds that never cooled. Maybe it's the carryover from having completed 747 ships over a 4 year period. Maybe we can pause now and see where we are -- honor those who brought us this far, and celebrate the new leaders among us. I think, sometimes, of returning to Berkeley where I always had such a strong feeling of the future and the possible. Here in Richmond the struggle to preserve and grow from the past is burdened by the constant sacrifice to short-term gains -- a legacy from the war years when time was such an overwhelming force? Could it be that it's worked its way into our civic DNA?

Wondering now why all this comes up for me today? It surely has to do with feelings of being overlooked, maybe? Though it doesn't appear to me unexpected. It's the norm, I think. There are bigger questions here than bruised feelings; of that I'm sure. Over time I've enjoyed much appreciation for my work and am blessed with an enviable reputation for service. I've been affirmed in so many ways, and it continues. No, it's not for want of praise or appreciation. Then what?

Maybe it's because when I look around I see lack of fulfillment expressed in so many ways. So many good people doing such good work -- and going without recognition and unable to ask for it because that's so awkward to do. So much emotional energy is wasted when we don't take the time to acknowledge one another; energy that provides the strength and the will to do the work of community-building that is so vital to the quality of life in any human enterprise. I see the frustration expressed by those stalwart passionate ordinary citizens who attend city council meetings; doing their best to call attention to civic problems, support the work of city staff when warranted, chastise offending members of city council, but (if you look closely) are almost always speaking for others whom they believe have been overlooked or unappreciated.

I'll think of this as justification for the ceremonies of appreciation and recognition that I'll participate in soon. It gives me a context in which to function. And -- it may be one of those truths that women have always known... .

Photo: Left to right: Starr King School for the Ministry President Rebecca Parker, honoree Dorothy Patterson; me, making the presentation; and President Arliss Ungar of the Board of Trustees. Dorothy is receiving her honorary doctorate after a lifetime of service with the UU-Service Committee, worldwide. This is on the occasion of the Starr King commencement ceremonies at the San Francisco Unitarian-Universalist Church.