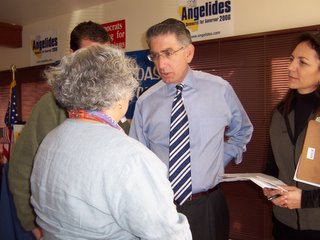 Hope I'm not just "making words," because this jambalaya of a life that I'm living at the moment defies description ...

Attended an economic development workshop at city hall on Friday. Every high roller in the region was in the room. The main event was State Treasurer Phil Angelides, my favorite gubernatorial candidate, who was here to introduce the city to his "Green Wave" program that promises to bring an economic boom to the state through energy-saving programs involving the introduction of new businesses designed to address our need to commit to a changing commerce to reflect concerns in re global warming. It all made sense. California is the sixth largest economy in the world. Change has historically sprung from what happens here and spreads to the rest of the country and the world. We must address global warming independent of what happens in Washington. Angelides spelled out a plan for starting that process. I'm convinced that he is the leader that I'd like to follow this November. The job now will be to move him from his position of defending capital punishment to one that will accept a moratorium.

On Friday afternoon I drove to Mendocino immediately after the workshop and on Saturday morning attended the Mendocino Democratic Club breakfast where, again, I heard Angelides speak. On Friday he spoke as the state treasurer. On Saturday morning I heard his campaign speech for the first time. There was almost no repetition. That was comforting. He has more complexity than might be expected from one honing his message for the Primary.

During the period of schmoozin' that followed his talk (during which he introduced his wife and daughter who were present), I was able to approach him for the few minutes that it took to say, "...hello, I'm Betty Reid Soskin. We met yesterday in Richmond. I'm also the former field rep for Assemblywomen Dion Aroner and Loni Hancock, and, I was a recent demonstrator at the gates of San Quentin in protest of the 3 recent executions. I'm aware that you're on record as supporting capital punishment. I want to know whether you're in support of the moratorium?" He was obviously not comfortable with my directness, but to give him credit, he held my eye-to-eye contact without flinching. He then broke his gaze -- looked down and said, "... I think that I need to tell you that I'm alone in my house -- my daughter believes in your cause." I knew now that I had a strong ally who was close to him and loved -- and that at some point this might not be a lost cause. I will work for his election and hope that his position will soften on this most critical issue. I don't have the power or the clout to bring that about, but I know enough others who are close enough to him to influence his position.

In addition to his staff, In Richmond he brought along CalPERS (the state retirement program) and CalSTRS (another) in combination with foundations and developers and financial advisors in a workshop designed to introduce that world of investors to this city that is poised on the brink of a period of renewal that will rival that of WWII, I think. There are opportunities everywhere one looks -- and entrepreneurs are arriving by every means possible. The room was crackling with the vibrations of opportunism and competition.

We three who represent the park staff gave no presentation -- it was not our time -- but I had a chance to renew old friendships with that world of financial enablers and it felt good. My head immediately turned to planning our next leadership tour to include that world -- I'd almost forgotten.

Noticed something else, too. There they were, Landon W. (San Francisco Foundation), Joe G. and James N. (forgotten the name of their multi-million dollar development enterprise); John T. (Sr. Director of Cushman & Wakefield); et al, all with warm greetings (kisses all around). I've never been in a position of needing to use any of their services so they are just Landon, Joe, James, and John; though they represent access to millions and millions of dollars in their professional roles. Do I need to think of them differently now that I'm hoping to help to expand the role of the new national park in this city? There's great need for historic preservation, restoration of historic sites, and youth programs around this history that gave the city its second birth -- and may provide the economic engine that will drive its third. This will be a new role for me. Wonder if I can make the transition?

Am waiting for one more announcement of a candidate who will enter the governor's race soon, but meanwhile -- will continue to think about how to relate to the candidacy of Phil Angelides. The 'til now undisclosed candidate is relatively unknown in the political world, but is one with a strong and vital message that resonates deeply for me. When she announces, I'll have some adjusting to do in my own thinking about just how much I'm willing to compromise.

You may be of the opinion that it hardly makes a difference about just how much power a single voter has in the process. Not so. I firmly believe that one can effect the shape of change in critical ways. We may not be totally responsible for that judge's decision to halt the last execution -- but I don't hesitate for one minute to take credit for it. If I've lived up to my own principles and acted on behalf of them -- then I claim the right to assume that I've been rewarded by fate. If I didn't believe that I couldn't get out of bed in the morning ... and then how on earth would "The World" manage?