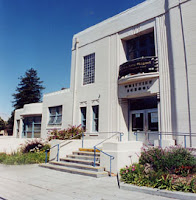 What a lovely afternoon ... spent in a most unlikely place ... .

Today I was invited for a command performance as the subject of "Show and Tell" at my bright and charming 9 year-old granddaughter, Tamaya's, fifth grade classroom. The audience was made up of two combined fifth grade classes, 48 students in all. I'm not at all sure where the rumor got started that children were universally out of control and that educators were unhappy campers. Not so. Surely not at Berkeley Arts Magnet School in the heart of North Berkeley. In that holy place there were eager learners, rabid payers-to-attention, and about the most bright-eyed and busy-tailed children one would ever want to meet.

I'd received a telepone call about a week ago asking if Tamaya's grandma would like to meet with the fifth graders for a presentation on whatever I'd like to talk about. Again, it was the uniform here that is the magnet. The ranger's dimpled felt stetson gets' em every time. I was surprised by a passerby as I was parking my car in front of the school. This smiling woman stopped to admire my uniform -- but clearly had no idea just who I was or what on earth I was doing on Virginia Street in Berkeley. Obviously I was out of context here. I admitted to being a genuine park ranger, and she grinned broadly with the words, "...and you're going to meet with the kids? How wonderful! You're about love and caring for the planet!" I realized then how rare is the sight of the National Park Service ranger here in this sophisticated urban city, and of how important it is that school children be introduced to one of the more exciting and humanizing aspects of national life.

Having arrived about 15 minutes early (as planned), provided a chance to visit for a few minutes with Tamaya; to scan the binder that holds her year's work to date; to see a lengthy essay that she is preparing for posting out among the exhibits in the long corridor on the first floor. It's a journal of her trip last spring to the Philippine Islands with her family. It was a reunion that would bring my two little granddaughters into the exotic world of their mother's large family. She is obviously still absorbing that 3-week adventure. I have been gifted with hours on end of scenes taken with their video camera -- from San Francisco International to Manila and the islands of their maternal homeland. I wonder at times, at how differently the world must look to this globe-trotting generation. In my lifetime, it was exciting to simply travel from one coast to the other, and I didn't do that until I was fifty. In my parent's generation, that must have seemed daring indeed. Their lives had been confined to three states, Louisiana, Michigan, and California.

At no time during today's visit was there ever a moment when the young teacher, Ms. Alison Merz, did not have total (gentle) control over her class. It was also true that tucked in among her lessons at the university had been the key to that process, "...we learn to respect by being respected." At no time was there the slightest hint that her students were either coerced or acting out of fear. They wanted to be here with her, and the courtesy shown to me was extended from her relationship with them.

The questions were polite but real. They wanted to know - not just about my ranger life, but about me. "What was the world like when you were our age?" "What do you like least about your work?" "Were there ever any bad times?" "Do you still know any of the people that you knew way back then?" Real questions requiring real answers.

Upon questioning I learned that many of those children had visited Yosemite and that some had seen Yellowstone. I wondered if the questions asked in Richmond as opposed to Berkeley might have presented quite a different picture. I must visit a comparable group in West County soon. This, too, is an important outreach activity that cries for attention.

We talked about what a park is and why we set land apart. "Because people need them to go to when they're stressed." (This from a 9 year-old.) We talked about why civic, state, and national parks, and I hope I was clear about the answers. I asked many questions, too. There were many raised hands. I sensed their openness and willingness to participate. There was genuine interest in the subject.

While waiting for the class to begin -- a young boy brought a black box 3-dimensional display for me to inspect -- he'd created it to memorialize his deceased father. It contained a place for a candle and a photo of himself at about 3 sitting in his father's lap. It was a touching moment. He'd removed it from a window-sill exhibit the class had produced for the Day of the Dead celebration. "Ms. Merz won't like that I moved it," he told me as he returned it to its place with the others. She'd left the room for a minute to check on the other class that would arrive soon.

It was a delightful and moving hour with tomorrow's grownups. It felt like being in a room with not-quite-mature young adults who were in these very moments growing into the leaders they will surely be in time.

Tonight I'm feeling such a strong sense of faith in tomorrow.

We must hold the world together until they can take it over, right? I do wish we'd done a better job on our watch ... .

...and let's hear it for these valiant young teachers who are molding the future even as we speak!
Posted by Betty Reid Soskin at 7:13 PM