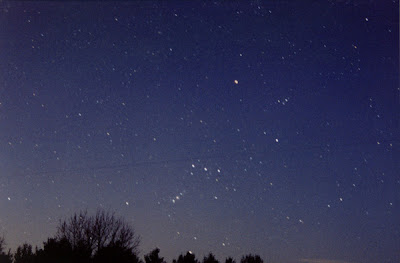 Who turned off the stars?

As always, the thoughts continued into the night. I'm convinced that the reason that elders sleep less is due to a subconscious awareness that time is winding down -- and that -- regardless of our physical well-being -- sleep is a total waste of time. There are so many opportunities to travel back over time and reconsider what we settled for as Truth, and that a second look may be important in these changing times.

The lively questions in yesterday's classroom wakened the answers (just before sleep) that I was unable to find while sitting before those wonderful children.

"How is the world different for you than it was when you were our age?"

My answer was superficial -- at the level of cell phones, ballpoint pens, and jet travel. It was too large a question to deal with in that little classroom. But the wheels began to turn just before sleep last night. And -- how I wish for the time to tell them where their innocent questions took me in the quiet of the night... .

When I was nine there were no bridges across San Francisco Bay. We took ferries to San Francisco, so it seemed so much further away and much more of an adventure. There were open creeks that meandered through the city, occasionally opening up into small ponds draped in willows that held springtime tadpoles to be taken home in jars of creek water -- pollywogs to watch grow legs and slowly draw tails into tiny bodies (miraculous!) as they grew into tiny frogs. There were open fields that would later hold more houses than were comfortable for any community -- which would later begin to rise into apartments and condos to hold more and more new Californians. Those open fields would host summer baseball games with homemade bases and fathers or uncles with the time to umpire and settle disputes about whether one was "out" or "safe." And -- because safe held a different meaning then -- we all played "One Foot Across the Gutter" and "Prisoner's Base" under the street lights (and without adult supervision) -- until bedtime and beyond. And -- there were small Mom & Pop grocery stores within walking distance of anyone's homes -- with owners who knew your parents and sometimes helped to stretch the budget with a loaf of day-old bread as a gift. There were ice-men in rubber aprons who came in trucks carrying blocks of ice for the kitchen icebox -- icy blocks slung over their back with menacing-looking tongs; and milkmen with glass bottles that would often be set just inside the never-locked back door out of the sun, if no one was at home to receive them. There was trust.

Those open city lots also brought us wild anise and milkweed upon which cocoons of the Monarch and lovely white Cabbage butterflies were attached -- and that one could very carefully break off the small branch to which it was attached -- to be brought home to watch in awe for the weeks it took for the miraculous mature beautiful creatures to suddenly appear to be released into the rose bushes to begin the fully-developed adult lives of all such creatures. What a powerful metaphor -- one I remember from about that age when a wise and sensitive young teacher made the connections for me. It was in this lesson that I learned the necessity of struggle -- metamorphosis may have been the earliest huge word that I truly understood. It may be the place where language became important. It was almost a private word since I doubted that my parents owned it (and even then I knew that one had to use a word in order to truly own it). It was all mine (and Mrs. Rhineger's), of course.

My preoccupation with words would set me apart from both my peers and my parents over time. I loved words with a passion, and often used them inappropriately -- though there were few at home who cared about words enough to make the corrections, but who managed to make me feel self-conscious and as if rudely "putting on airs". (I suppose today such a child might be accused of "acting white") And even at the tender age of 9 I knew that really long words (like disestablishmentarianism) were really trick words and not really interesting at all. But metamorphosis was real and true and described a dramatic life process that fascinated me. That one I continued to own well into my teens, when I discovered that it belonged to more thinkers than Mrs. Rhineger and me. Maybe this is where I began to learn about intellectualism and to respect knowledge for its own sake (...and Bartlett's Quotations, and Roget's Thesaurus, and the World Book Encyclopedia -- and Edna St. Vincent Millay!). 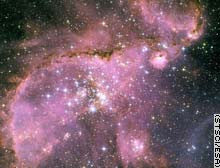 But the aspect of my life as a 9 year-old that I most miss would have to be stars. I don't know when we turned off the skies of my childhood, but -- over years and years -- they disappeared. I remember the magic of lying on my back in the grass and watching the night sky for hours. I could look deep into space and see billions and billions of tiny lights and that I was aware, even at nine, that children all over the world were sharing this magnificent sky with me. That it mattered not whether they were looking up from a yurt, a tent, a hogan, an igloo, a fire escape, a thatched hut, from a sled, or the back of a truck or wagon, or from the deck of a ship at sea, out of an attic window or from a city rooftop, or from the window of a train, we were sharing the beautiful night sky. It was the earliest miracle that I can remember, and the first thoughts of the internationalism that would guide my life and my politics since that time. One simply cannot make war with grownup children with whom you've shared the miracle of the skies. I knew that we spoke of it in different languages, but -- if we could just stand together looking up -- it wouldn't matter. We would all understand in the jumble of sounds or -- even in the silence -- what a wonder this was. This I knew. The night sky was probably my very first awareness of "Truth," truth that has remained constant over a lifetime.

Perhaps one light switch at a time, year after year, decade after decade, we turned off the miracle. I'm not sure when it happened. But somehow the night sky began to close in -- light pollution eventually blocked out almost every star leaving only the brightest of the planets, the sun and the moon, and the depth of the night vanished, and with it something vital was lost.

The night sky was a universally-shared experience. It is no longer. It only exists in those places where the city lights have not yet invaded the atmosphere. The children in Ms. Merz's fifth grade classroom must be taken by car to a Planetarium to look at the night sky through a telescope in order to witness this -- the oldest of the natural wonders.

I will have some of the wonder restored in February when I'm enrolled for two weeks at the Grand Canyon's NPS Training Site. I cannot believe that the star thieves have stolen away the night skies from that holy place. On some nights, there are still echoes of Van Gogh's Starry Night in Mendocino when the incoming fog creates patches where single stars are isolated and therefore appear slightly fuzzy, distorted, and even more brilliant as viewed through the bedroom skylight , --- but even in that Eden the night skies have been dimmed by the pollution of city and coastal lights -- and, it all happened so-oo-o gradually that I'm not sure that too many have noticed; or that most of those who do still remember are now coming to the end of life... .

I will think of Tamaya's classmates while in that wondrous Grand Canyon National Park, and know that -- if ever the question arises again -- I'll know the answer... .

It is the miracle of the night sky -- the stars and the planets -- that I miss above all else -- and that defines the difference between the worlds of 9 year-old Betty Charbonnet and of Ms. Alison Merz's fifth graders.