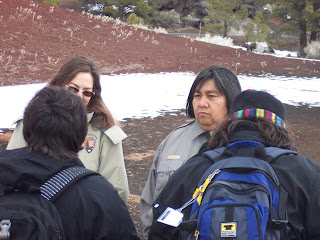 We were on a field trip to Hopi tribal lands and a remarkable archealogical dig that had unearthed a village complete with pueblo and blow holes ("...where the wind God lives").

It was here that we met the most unlikely National Park ranger. He was about 5'7", "portly," with a protruding rounded belly and a waist-length jet black braid that bounced loosely against his back as he walked. This was Ruben, a member of the Wupatki people of the Hopi tribe upon whose land this national park had settled. In his park uniform Ruben appeared cartoon-like. I felt sorry for him in this inappropriate "costume" that did not fit the image of a bronze present-day Hopi warrior. How sad, I thought! He seemed more captive than ranger in these clothes. Given the history, I found myself wondering how his people viewed him dressed so...in the garb of the invaders ... .

The reception center features murals that tell the tragic story of a time in the not too distant past when our government came to the decision that the Hopi had over-grazed the land with their sheep and that they must go. The lands were then confiscated by the NPS and the tribes burned out of their pueblos. The Hopi were then dispersed across the deserts of Arizona. To its credit, the National Park Service owns that history and the murals on the panels of the reception center are true to events just as they occurred; despite the discomfort this surely must bring to today's more socially aware park administration. The saving grace in all this may be that -- as a nation -- we're finally having these long-silent conversations and owning responsibility for our past through our system of national parks which are actively engaged in the telling of the stories of the nation in countless ways.

After our class had inspected the excavated Wupatki Pueblo and learned something of its history through a quick study of the exhibits in the reception center, we gathered outside within sight of the excavation to hear a presentation from our unlikely interpreter and park ranger; Ruben.

And then it happened: This chubby dark-skinned oddly-garbed park ranger turned to one of the instructors. He quite deliberately removed his NPS ranger hat and handed it to someone standing nearby -- clearly by prearrangement; and in that simple act of apparent but practiced defiance, reclaimed his identify. It was a moment not unlike the act at the end of the movie, "Miss Jane Pittman," when -- after a lifetime of humiliation and racism -- Miss Jane walked up those stairs and took a drink from the "Whites Only" water fountain. This was Ruben's moment of transformation. One that he could not have brought off standing under the traditional and honored hat of the NPS. This would be about his people.

We listened to him relate his stories for the next fifteen emotional minutes; of his doubts about the wisdom of "the dig" of that Wupatki pueblo -- a construct that "probably should have been allowed to remain in the earth ... to become one with it." He spoke of the "Eaglet" story; of the decades-long legal battles for permission for his tribe to re-enter into their homeland and what was now "the national park" to capture an eaglet to be used in a 2000-year-old ceremonial ritual that was a part of the ancient Hopi religious tradition. The eaglet was to be revered as it matured under loving care. It would be raised to centuries-old tribal standards -- to be sacrificed at the end for religious purposes. The sacred feathers would then be used for traditional ceremonies. This practice, of course, clashed with the National Park Service's mandated mission of preservation of all natural resources. Needless to say, the Hopi have been continually denied their request despite years of litigation through our courts.

He talked about knowing many of the tribal land's secrets - of sites he would never disclose to anyone for fear of their exploitation and uses that would defame the long-held belief systems of the Hopi. There were hints that those secrets may be common knowledge among the Native American -- but would be withheld against further invasion from "the Invaders;" (my word, not Ruben's)

A strange thing happened as I listened. This plain little stubby man in his grey/greens might as easily have been standing before us in a feathered warbonnet, buckskins, and beaded moccasins. He was transformed in the telling of his stories. He was all pride and dignity. And -- the Anglos and others of us who stood around him were subdued and respectful. This was a giant of a man who was well able to stand on his own and not be buried by any bureaucracy. I had the distinct feeling that those park boundaries we honor have little meaning in his world, and that the Hopi world is inclusive enough to allow us to believe that those boundaries are real and unyielding.

I suddenly saw myself as the "exotic" in my park in much the way that Ruben is at the Wupatki site. I am the only African American on our staff. I wondered if I'm living my exoticism as effectively as Ruben is living his in that world? Like Ruben, I am able to speak my truth and bring my whole self into the process. And, like Ruben, I'm experiencing the respect of my community and my colleagues. I felt a deep kinship and an affirmation in my work from this quietly heroic man whose life had been shaped by events deep in human history but undying in their effects over succeeding generations and into his lifetime.

I won't forget him.

Since arriving home I've had dreams of that pueblo -- peopled and busy with life. And in those dreams Ruben appears in full native dress and holding an eaglet ... .


Click on this panoramic view of the pueblo for the full impact. It had an effect upon me similar to that experienced while visiting the slave quarters at the estate of Gen. Robert E. Lee at Arlington in Washington, D.C. Ours has been a painful history -- most of which we've never really processed. Perhaps this is the role people like Ruben and I are now fulfilling -- at a time in history when those lost conversations are finally encouraged and made meaningful. 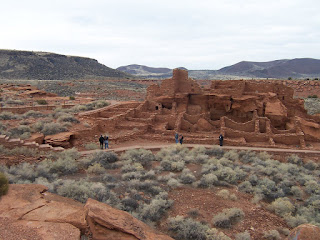