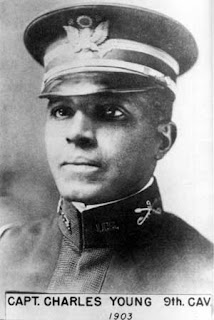 Capt. Charles Young of the National Park Service and the son of former slaves ... .

How sad it is that we know so little about the giants of African American history. How sad is it that young black students have reached this generation still being asked to honor "the first black whatever" when we've been contributing with valor and distinction ever since the nation was formed. There are still articles being written based upon our continuing and relentless "march into the mainstream" as though we haven't always been there moving the country forward with our black shoulders to the wheel of progress along with immigrants from all over the world. And for more than 300 years -- with our legs in irons and our minds untaught. And we've been at it far longer than most. In my own family -- it has been since before the time of the Revolutionary War.

What kind of extraordinary man did it take to leap in one generation from the illiterate life of enslavement to become an honored graduate of the prestigious West Point Military Academy?

(Think Frederick Douglas, former slave and trusted advisor to President Abraham Lincoln. In my own family, my great grandmother, Leontine Breaux Allen, born in 1846 and enslaved for her first 19 years of life -- whose grandson, George Allen, became the president of Texas Southern University.)

What kind of nation is it that can maintain a system of governance that sacrifices at least a tenth of its human potential upon the altar of blind and debilitating racial prejudice? A nation that -- 345 years after the tragedy of slavery - only now has begun to see what racism has robbed us of over a shameful, bitter, and bewildering past and is (quite possibly) now writing us into a brighter future.

And, what kind of a nation is it that has the flexibility written into its founding documents that has allowed for the insight; the forgiveness and atonement; the breadth of experience garnered from the agonies of apartheid that we are only now beginning to recognize for what it was and is? The cost of the maintenance of white privilege is unfathomable; more than any nation can continue to burden itself with and still survive as leader of the free world.

And, as one of the forgotten heroes who forged the trail upon which today's black leaders now move with growing assurance, Captain Charles Young (who attained the rank of Lt. Colonel before the end of his career) and his Buffalo Soldiers of the Negro Armed Forces stand as reminders for us to take the time to pay homage and provide recognition so that young black students who are desperately searching for role models of excellence can find them.

And -- as a reasonably informed elder -- I'm ashamed to say that I only discovered him this past week.

What a profound statement that makes about the failures of our system of public instruction with its critical omissions of black achievement and heroism.

This is a plea for black scholars to stop carping about how others tell our stories, and gives a powerful reason for us to tell them for ourselves and for future generations.

Our National Park Service provides the tools and the resources for doing just that.

Woke this morning knowing without a doubt that I'm precisely where I need to be on the planet this day.