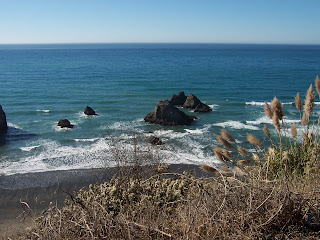 It is here that I find the balance to a life so often strained by too much, too often, too filled with intensity and purpose... .

Last weekend I drove up the coast -- through Marin County, past Santa Rosa and through Cloverdale - into the long approach to the Anderson Valley with its miles of curving roadways past Boonville and Philo -- through more miles of orchards and vineyards, into the redwood forest -- then -- to the blue Pacific with its unbelievable expanse out to the horizon with its suggestion of eternity!

I do this as often as time allows and at the end of the long 3-hour drive I find him waiting - fulfilling his promise of sunsets and salt air and peace. With the latest copy of the New Yorker and tea and toast with marmalade in bed with the large skylights over the bed changing its program from starlight to wisps of drifting fog to clouds and -- an occasional swooping hawk or a stray gull warning of a storm far out to sea -- for just a fleeting moment... .

There are long talks about cabbages and kings, friendly "fierce" debates over today's developments, speculations about the upcoming presidential election, and the dire financial picture that seems far away and less threatening in that setting.

It takes less and less time now, to become aware of the world dropping away and in its place a serenity to which I'm unaccustomed and which I don't always trust, but that I'm beginning to understand as essential and attainable when I stop long enough to look and listen ... . I remember Sister Corita Kent's admonition in an 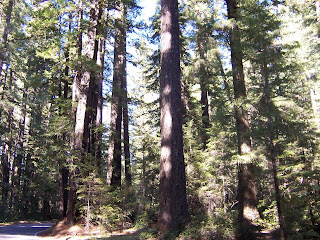 art piece of the Sixties that said, simply, "don't just do something, stand there!"

Until, I realize that there are those for whom this is normal. Everyday. Proving by the sheer magic of this sublime state of being enjoyed by so few in my experience, that the ocean and the redwoods are as real and as close and as accessible as we allow them to be.

Time at this stage in our lives is all the more precious. I can no longer afford pride nor lack of time or dedication to purpose to steal this birthright that we owe to one another as sentient beings.

This is the place where the magic lives -- and where beauty is tangible -- and where the illusion that time is eternal holds irrevocably true. Where there are no remaining doubts that we're each an element in the universal all. It's where I can go to experience what forever looks like.

Such is the friendship that I've found and cherished over these past years ... .

There have been days when the fear of the fragility of life brings quiet terror, but the feelings are fleeting and are quickly replaced by the joy of the moment. It's in such moments that time becomes painfully relevant and finite. A moment when there is so little future to look forward to.

Now is truly all there is.

But then we've always known that, of course. The acuteness we're experiencing demands that attention be paid to just how it will be lived -- now that we're where we are on the continuum.

So we drove high up into the mountains -- high up into the giant old-growth redwoods -- later returning back down along the magnificent coastline from quaint Westport past the Pacific Winery to Fort Bragg and home again to Mendocino ... and the panic was dissipated.

I called it motion sickness.

He couldn't know that it was the cold cloying fear and profound sadness of inevitable endings ... .
Posted by Betty Reid Soskin at 6:14 PM