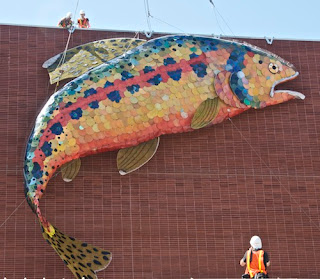 A very special Saturday -- another one-of-a-kind day of surprises ... .

Today started in its usual Saturday way with a leisurely cup of tea after sorting laundry and selecting the first load ... then musing absently about just what I would write today ... choosing to edit instead of create -- separating what was originally one lengthy piece into two quite separate entries (see below) and making myself another post for this date.

By 11:30 it was time to stop procrastinating and get back into uniform to return to the office for a prearranged visit with a group of young people who make up the newly-formed Home Front Youth Corp. I wasn't exactly sure what was expected of me, but their instructors (Rangers Elizabeth, Carla, and Craig) were already there and I was to slip in to do whatever my part required.

When I arrived they were viewing videos of the World War II era -- Rosie was the centerpiece - but our little DVD of "Lost Conversations" was also to be shown (as I now recalled) and I would probably be expected to lead a short discussion afterward. Easy. This was something that has become fairly automatic and requires little preparation.

It went well. I could feel the connection that I've now learned to wait for and not try to force in any way. The young people were receptive and the films shown were interesting.

That lasted all of 45 minutes leaving me with a feeling of being all dressed up with no place to go until I got into my car and remembered that Dorian had mentioned a show at the Richmond Art Center (now under renovation) where she'd heard that there was something I might like to see. She'd grinned mysteriously in the telling -- and I guessed it might be related to the piece that Rodrigo and I had participated in a couple of weeks ago. Maybe they'd produced some stills that I might be able to see. 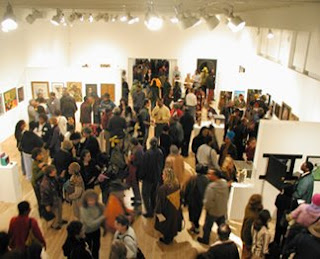 I recalled that this was a part of the community program opening soon. Would that be today? Maybe. I'd stop by and take a look.

Walked in to the Center to find a meeting in progress. It was a meeting of the Richmond Art Center's Board of Directors who were in the process of electing new members and preparing for the opening of a new show when the meeting ended. I was motioned to a seat and slipped in as inconspicuously as I could but felt just a little out of place. There were many in the room whom I knew in one context or another, and it was soon comfortable and I felt a little less like one who'd crashed a party.

As the meeting ended a raffle was held. (Virginia had slipped a raffle ticket into my reluctant palm and urged me to take part.) In the way that happens on very rare occasion to those of us who "never win anything" I found myself the recipient of first prize -- a $100 contribution toward an art class of my choice! Incredible! Been wanting to do this for years, but never felt the time was right and it seemed so totally self-indulgent. But after all, Dorian is a NIAD (National Institute for Artists with Disabilities) artist and this would give us something new in common. What a wonderful gift! This I will do, and soon.

In addition, a noted muralist, John Wehrle, a board member came over to tell me that he had received the commission to create a new giant mural at the primary gateway to the City of Richmond (Macdonald Avenue off I-80). He is using a number of identifiable community people in his mural and would like for me to be one of them. At first it felt a little dishonest since there are so many members of this community who have lived here all their lives and have given so much. Though I've spent most of my entire lifetime in the San Francisco Bay Area, only the last ten or so years have I lived in this city. He waved away my limp protest and I agreed despite those very temporary feelings of guilty pride.

To his comment that he would be giving me a call "one of these days" to make arrangements, I laughed with "...don't wait too long. I no longer buy green bananas!"


Photo: The marvelous fish sculpture that adorns the entrance to the Richmond Art Center is being removed in order to be cleaned and restored to its original splendor before being lowered back into its place high over the entrance to this great art center. There is no comparable arts facility in all of the Bay Area and beyond.

2nd Photo: The very active arts community seen here at the opening of the annual "Art of Living
Black" exhibition that has become one of the great events this city features.
Posted by Betty Reid Soskin at 4:53 PM