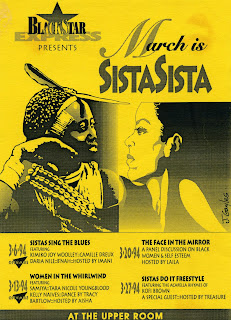 At a time when I should be choppin' and bastin' in preparation for Thanksgiving dinner, instead I'm still lost in time -- back with that unlikely underground arts movement that so excited the active artist submerged not so deeply inside. In other lives I surely must have painted huge canvasses; sculpted magnificent shapes and figures; danced before kings in grand marble palaces ... (maybe sang in heavenly choirs?).

The sheer luck of having Rafiq and his world enter into my (temporary) life as a merchant in Berkeley awakened a part of myself that emerged (this time) in a support role that fit nicely into the current incarnation. (Ye doeth what ye canneth.)

(That kind of talk is surely going to threaten my standing in the Atheist/Agnostic community.)

One of the great benefits of being old and still standing is that one develops this amazing facility for dot-connecting; for knowing how all the stories turned out; and of being able to link together chapters of living that younger folks lack the capacity for. No fault of their own, donchaknow, they just haven't lived long enough yet. Some things require mellowing and just a tad more humility.

For instance, I've grown to the age where I get awards for being able to tie my own shoes while the young struggle for recognition and appreciation. I suspect that someone will want to recognize me for calling attention to this rich history of the Upper Room when my major role was one of seeing to it that there was always toilet tissue in the bathrooms and that all the lights were turned off as we left after an evening of celebration. That's what grownups were for in that enterprise; except for Rafiq and Muhammed Al-Amin who served as Gurus and Chiefs of Inspirations for the young, the old, and the in-betweens who were attracted over time to their imperfect Camelot. The Nu Upper Room was a youth driven impudent and edgy enterprise rare and deserving of nurturing and protection by the rest of us. At that we failed miserably.

Maybe it had to be underground in order to protect it from contamination by the unknowing; a question worth asking. Perhaps an element in its power was in its fragility. Maybe it was meant to flame high and bright then fade into oblivion, having sewn its seeds to be emulated elsewhere in the world. But there is tragedy in the fact that the history has been lost, and those who lived it have been dispersed to the winds with few knowing of its existence, though I suspect many who are still around will come together in remembrance soon.

I've wondered, from time to time, just what might have been the relationship (if any) between the loss of the Nu Upper Room and the emergence of the East Oakland Side Shows? Did some of that creative energy eventually move out onto to the streets in search of expression? Had anyone known, might it have been different? Is the timing all wrong for this to have been in any way connected?

(The musings of an undisciplined mind.)