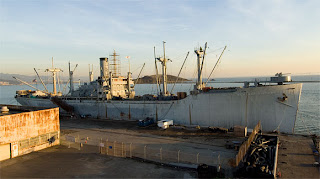 It was a long night of tossing fitfully -- dreams of the last time Rick and Gordon and I were together ...

on board the SS Red Oak Victory as she was being towed down from the mothball fleet berthed at Benicia ten years ago. She was a gift from the Navy to the museum and would be restored lovingly by veterans of WWII over the next ten years. Gordon had been working as a volunteer for the Richmond Museum of History and had been enthusiastically stamping and folding invitations and otherwise engaged in the planning of this grand adventure. I was working at the time as field representative for Assemblywoman Loni Hancock, and had made it onto the invitation list as such. Rick was there with Gordon. We were so happy that day -- with several hundred other celebrants; with fire boats greeting us with their giant sprays; with WWII planes flying overhead as we sailed triumphantly under the Richmond/San Rafael bridge!

One year later Gordon would be dead of throat cancer and Rick would soon follow him into that watery grave beside the ship -- a victim of alcoholic abuse and the pain of rejection since childhood. They were not only a gay couple, but Gordon was white and from Portland, Maine, and Rick was African American. They were scorned on both scores.

Woke this morning feeling very tired and forlorn (old fashioned word, but fitting), and I'm foolish to think that I can face today unmoved by memories of their loss. A microphone in my hands might be very risky. I'll stand at attention with the others. Will surely hold the flowers for the ceremony -- because my work demands that I fulfill those duties. It will be difficult to remain in the present and not see that very painful past. The triggers are hairlike, and hard to control. I will ask to be relieved of the "saying of a few words" as planned.

There will be many opportunities to challenge conventional thinking on the matter of same sex marriage. Today is about something quite different. Today we honor the veterans of all wars and there is a responsibility to contribute to this ceremony in the ways that are pre-ordained by custom.

But there will be moments -- some time between one o'clock and four when my stint ends -- when I can stand alone at the railing and remember the little boy I so loved and have now outlived by eight long years.

The holiday season is always the most painful.

Small wonder that the cracks in my psychological armor were pierced on Sunday.