He was born in racist Greenville, Mississippi, in 1936. He died far too young. He grew up in Maryland, in the shadow of a Capitol built by slaves. There is no way that Jim Henson could have not been shaped by his times -- the Civil Rights movement was surely playing powerfully in the background of his life. The influences of the vestiges of the Civil War; the trail of violence that marked his birthplace; the history of lynchings, the lives sacrificed for the right to vote ... .

Strangely, it was the memory of this gentle artist with the inner child so strongly influencing his work that has haunted me in the days following the election of our new president. 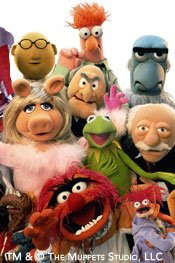 Henson, alone, may have quietly changed the mindset of an entire generation of children who were enchanted by his multi-colored, multi-everything creatures who slowly chipped away at the way we saw ourselves and one another. He taught compassion to some and self-esteem to others -- and love to all.

Henson and his Children's Television Workshop confronted the stereotypes and created pathways between children of every color and culture. He did it at a time when they were eager to learn and accepting of differences. We all got to learn how "one of these things is not like the other" and how it "isn't easy bein' green" from a thoughtful and wise Kermit the Frog. And our parents were listening in the other room as the tiny ones -- so malleable -- so innocent -- so open-- experienced the evolution of a nation's ethos -- and in time were touched as deeply as were the children.

Does anyone doubt, any longer, the power in early childhood education? Has it dawned on anyone besides me (and Linda Tillery, of course) that those babies of the Fifties, Sixties, Seventies, and beyond are now sitting in the boardrooms of major corporations; are the legislators now entering the state houses across the nation; are running the military and guiding the arts? They're the Sesame Street alumni, and they "got it!"

If only he could have lived to see how his magical creatures helped to change the world! 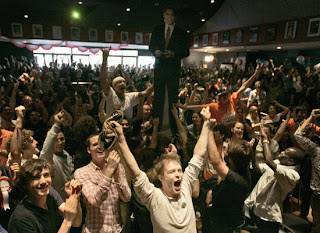 On Tuesday, those Sesame Street graduates were gathered on the malls, in front of the courthouses, waving American flags in town squares all across the country. They've reclaimed "patriotism" and sentimentality. They came together spontaneously in the thousands, peacefully, in celebration at Grants Park in Chicago; and in the far corners of the world. They were proud of themselves and of their new president-elect, knowing that we'd all crossed a threshold of some sort and that life would not be the same, ever again.

The little Obama girls will see a very different world than the one that Jim Henson was born into, and it's my guess that he intended it to be just that way.

And, I do believe that we have a ways to go still before equality is fully realized for all, but those facing up to that challenge are approaching it from the same side of the social barriers --and we're about as varied as those lovable Muppets are that Jim Henson gave to the world.

There are many heroes who contributed to this movement, and Jim Henson should be up there with the rest of them.

Photo: Bottom photo taken in Brisbane, Australia, when the election outcome was announced to the world.
Posted by Betty Reid Soskin at 5:44 PM