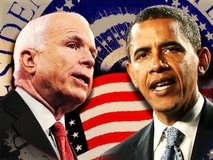 None will ever know how difficult these past months have been for one so terminally political as I ... .

Though I've not missed total involvement in the electoral process since my first vote at the age of 21, in this most remarkable election in the lives of all those living today - I've been relatively silent. No walking precincts. No endorsements or bumper stickers. No placards on my car's back window nor campaign buttons on my lapels. Checks were submitted online and phone-banking from my cellphone from home. But, yes, I do have at least two tee-shirts and a couple of souvenir buttons brought home from one of the national conventions by friends. But for the most part I've never ever been so uninvolved in presidential campaigns.

There weren't the usual gatherings at campaign offices or attendance at work parties. No. This was a very different experience for me; though the Internet did allow the kind of anonymous participating in online discussions that removed some of the sting of isolation. Not sure I could have managed without some way to vent.

It is probably a wise decision by government to limit the ability of federal and civic employees to lobby in these cases, but it's really frustrating. I've surely felt the need for restraint and have agreed with the principle, in general. It's in the specific that it becomes so hard to hold to such rulings.

Today is Sunday; the last after a two-year battle for so much more than the White House. It may be a battle for the soul of the nation -- a crucible.

Since the National Park Service manages the White House, The Capitol Mall, all monuments and memorials in Washington, D.C., we rangers can volunteer to work the Inaugural proceedings. Can you imagine what a plum this assignment would be if realized?

We're near the end of the process now; the historic election is only days away. And however it goes, I've volunteered to work the Inauguration in January. If chosen, I may be picking up trash behind the parade or working a bottled water station, but I'll be there, hopefully. Though that will depend upon the outcome, of course (so I suppose it's not really "however it goes" at all). And anyone can surely guess from the content of my writings just where my heart lies and just how high my hopes are for the long-delayed fulfillment of the promise of the great American Experiment.

Wish I could sleep from now until the first precincts are counted!
Posted by Betty Reid Soskin at 11:42 AM