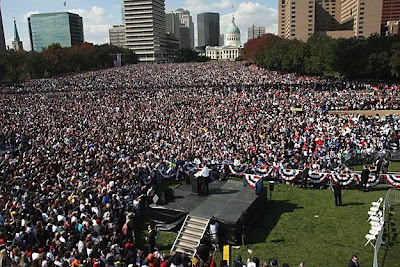 So many moving images over the past weeks... gave up trying to save them all, but this is the one that left me speechless and awash in tears ... .

It came in an email with this message:

The picture above is from the Obama rally in St. Louis. I guess the eye is first drawn to the sheer number of people. Impressive. But that's not the point of this picture to a historian.

If you look in the distance, you can see a white building with a greenish-copper dome. That's the Old St. Louis Courthouse. For years and years, slaves were auctioned on the steps of that courthouse.

The Old Courthouse used to be called the St. Louis State and Federal Courthouse Back in 1850, two escaped slaves named Dred and Harriett Scott had their petition for freedom overturned in a case there. Montgomery Blair took the case to the US Supreme Court on the Scott's behalf and had Chief Justice Roger Taney throw it out because, as he wrote, the Scotts were "beings of an inferior order, and altogether unfit to associate with the white race, either in social or political relations, and so far inferior that they had no rights which the white man was bound to respect."

I found it rather uplifting that, 158 years later, the man who will most likely be the first black US President was able to stand outside this very same courthouse and gather that crowd. Today, American looked back on one of the darkest moments in its history, and resoundingly told Judge Taney to go to hell!