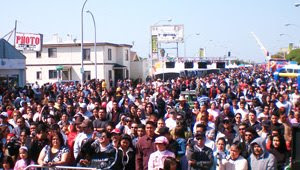 Not even the slow steady light rain could dampen the spirits of those who gathered along 23rd Street to watch us pass by today. I was Unit #43 driving alone in today's parade, inching along in our NPS sedan with the signature arrowheads emblazoned on both sides; dressed in full regalia; sandwiched between a small contingent of U.S. Naval folks and a large flat-bed truck carrying several miles worth of "Cielito Lindo" blaring loudly enough for the late sleepers in the lower hills to hear!

I could remember waking in the night wondering if the headlines this afternoon would read, "Lil ole lady mows down drum and bugle corps in today's festival parade!" But, gratefully, it was not to be. Though it was my first ever participation in a genuine parade, it was all carried off professionally with the proper attention to regal smiles and graceful hand-waving (it's all in the elegance of proper wrist rotation!). Only once did I feel skittish and that was at a point in the proceedings when the mounted caballeros rode past going in the opposite direction -- with horses that didn't seem all too sure they wanted to go that way ... . I held my 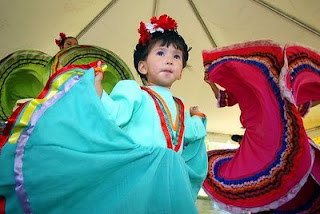 ground, stared them down, and they -- with some resistance -- clipped-clopped on without incident.

The trick was to leave at least 40 feet between my car and the marching unit ahead; never move out of first gear; and to be sure to maintain eye contact with those who waved back. Nuthin' to it! The best moment came when I was able to catch the eye of a child (perhaps 8-9) standing at an upstairs window of an apartment all alone and looking forlorn (ill, maybe?). I waved and his face lit up brightly as he waved back. Our eyes had met briefly, but it was a few seconds of full recognition. How nice! Made my day, and perhaps his as well.

Now that I've mastered the finer points of parading despite precipitation and inexperience, I'll start preparing for the Juneteenth Festival Parade next month.