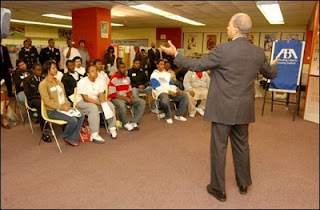 Thinking about Justice Thurgood Marshall and the Brown vs. Board of Education ruling -- 1954 ... .

I've been including in my talks lately, the fact that one of the gifts of aging is that one knows how all the stories turned out. True. An octogenarian view of history makes possible this period of summation, only now that the patterns are visible. Every now and then there are flashes of insight and the implications are inescapable. Each time I find myself watching news coverage about the plight of public education, the tiny pieces of incremental change add up to a reality that is disturbing. We've experienced a downward spiral and lost control of the way we're schooling our young. And, how else does a democracy survive except with an educated electorate? After 55 years of living with the results of that much-heralded decision, has the system of public education been successfully dismantled?

I'm not at all sure that those who championed the cause for equality won that one. In fact, it seems more and more evident that we may have lost that battle resoundingly. Recent studies show that segregation is more evident than ever and that we're a long way from achieving the goals of the mandate of 1954.

Just after the order to desegregate came down from the Supreme Court (by the way, a racist decision since it was the first time in history that a ruling was not immediately adopted but included the words, "with all deliberate speed") the disintegration of public education began. This meant that we allowed enough foot-dragging for the forces of resistance to organize and defeat the intent of the ruling. Black children who were attending all-black schools lost their teachers for the most part since our educators could not follow the kids into the newly integrated schools due to what was considered inadequate training. Our children were suddenly tossed into a world where everyone with authority was white, while black teachers who had been held in high esteem in their own communities were unceremoniously purged from the system.

Most white children throughout the southern states were moved into tax supported private "academies" created to keep them out of what was believed to be "harm's way." As the result of sometimes violently protested busing programs, schools everywhere were gradually re-segregated since demographics now followed housing patterns and racism determined where families of color could live. The great suburbanization of the Fifties withdrew much-needed tax dollars from urban school systems throughout the next two decades, a financial loss to inner city schools that has never been regained.

Over time, we've forgotten the genesis of "academies," and they've moved out of the south and been transformed into "charter schools" a change that has -- over time -- re-directed funding away from public education and into often untested and highly-specialized voucher-supported or privatized corporately-run institutions. And though often credited with introducing important innovations, accountability is often overlooked. We appear to have completely forgotten their genesis or why they exist at all. I felt a ripple of concern upon hearing our president speak out strongly in support of charter schools, and found myself wondering if his relative youth had shielded him from making the connections with the past?

Meanwhile, graduate schools are by now so costly that only the relatively wealthy can afford to attend. With teaching so poorly paid in comparison to other careers, repayment of student loans has become impractical for most students, black or white. In time it's my fear that -- whether or not we ever achieve racial equality -- it will be those who can afford the education who will continue to lead in all fields; a further extension of white privilege.

Why am I mulling this over at all? I discovered in a conversation a few nights ago that my son, David, is working frantically to find some way to finance his two young daughter's (11 and 13) tuition in Catholic school. Would you believe that for a semester it will cost $23,000 for each? This is not some exclusive educational institution for special kids; it's just your ordinary neighborhood parochial school for ordinary Catholic children. And beyond that first semester -- what then? In the urban public school that they currently attend, participation in the vollyball program had to be skipped since it would have required a payment over $700 for each for the season. Could the fact that the junior proms and senior balls -- that used to take place in specially decorated school gyms and that now involve limos and grand hotels and week-long spring breaks in Cancun or the Caribbean -- suggest a profitable arrangement by school districts with travel agencies and the hotel and visitor's bureaus in major cities? Should we be thinking "kickbacks" or is this grandma's paranoia?

Am I the only one who remembers my own introduction to the arts and music and literature and science came from public schools that were funded by us all? The PTA may have funded band uniforms with car washes and bake sales (and I'm not even sure about that), and the local grocery stores and gas stations collected coins in a jar on the counter for field trips, but it was all there. It seemed effortless. I can't recall my own parents ever being concerned with anything beyond making sure that I fulfilled my obligation to attend classes on time and neatly dressed for the day.

What have we done?