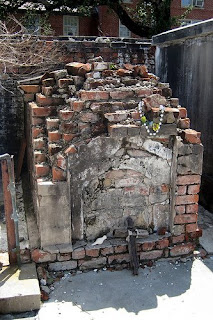 Are the spirits of the ancestors doing cartwheels in St. Louis Cemetery?

Word arrived midweek that -- due to a critical illness of someone dear to them -- our newly-discovered Charbonnet cousins have had to cancel their trip to the West Coast in July. I am devastated! Had already sent out word to local members of the family to expect an invitation to a no-host reception at a picturesque hotel in San Francisco. Everyone was psyched up for the grand reunification of the Charbonnets across the racial divide. But it is not to be; at least not yet.

When the message came I felt cheated -- who knows just how much longer I'll be around to see this miracle occur? I so want it in to happen in my time!

After sitting with the disappointment for a few days, Sunday morning I searched through my e-mailbox for the contact information he'd sent earlier -- picked up the telephone and dialed the number -- that of not-yet-met Paul in Baton Rouge, Louisiana. Suddenly his voice was on the line and it all felt so natural; as if we'd been friends for a lifetime. "But you sound like someone in her twenties," says he in disbelief. Not sure what he expected, but surely not the sound of my voice.

We chatted like old friends and when the conversation ended I was sure of one thing. That we will meet when the time is right. That his emergency situation will end and that when it does -- either here or there -- the "Twain shall meet"!

In the dark later just before sleep, I visualized the white Charbonnet ancestors slipping out of their shrouds and their eerie above-ground vaults in St. Louis Cemetery to dance in celebration that (for the moment at least) the separation twixt the family's white and brown branches would hold. I can only imagine that the brown Charbonnet ancestors were clinging tightly to their crypts -- wondering just what kind of mojo was operating that would have allowed these upstart generations to believe such a thing to be possible anyway? After all, you know what happened to Plessye v. Ferguson, right? ... and right there in New Orleans.

Well, there's been a reprieve. Maybe they're expecting that we'll sober up and come to our senses now that there's been a break in the proceedings. Perhaps we were catapulting toward this in-gathering cavalierly with little thought of what it all means. Perhaps a little reverence here is in order.

I say time is on our side, and that the great Charbonnet clan will rise to the occasion and begin to do some serious planning about just how we'll bring this historic American family into the 21st century, together, disquieted ancestors notwithstanding. It's a serious undertaking, and one that deserves serious consideration. We must come to this willingly and with openness. That we all won't be ready for this step at the same time is a given. Some will need more time to ponder the over-turning of centuries of cultural mores and attitudes. Some will embrace the concept but find that they're simply not emotionally ready for the leap. All in good time. After all, we've been on this journey on parallel tracks for more than 300 years. A few more months can't matter all that much.

I'm so looking forward to wherever these first steps lead ... .

Maybe Paul and I will play drum major for awhile until the parade begins to form behind us.