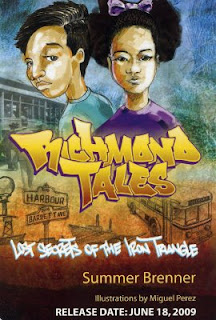 ...that tiny spark that springs from mid-air from friend-to-friend and ignites the creative energy that always seems to be waiting in the spaces between ...

This time it was a casual conversation with my friend and author, Summer Brenner, Berkeley writer and all-around good person who has worked -- often as a volunteer -- in the Richmond and Berkeley schools and nonprofit programs for many years supporting the teaching of literacy. We were talking about the Wisdom Tree* that has stood proudly through many generations of Richmond's children and whose story is almost completely unknown; except for some of the men of the community who have been meeting in its shade for more than a century. Says I to Summer, "you should write a book about the Wisdom Tree for the children." Answers Summer, " ... perhaps I'll do that."

The last time we worked together was on another Summer-created project called "Where I'm From". This was a program conducted at Richmond High School that paired elders with teens and which I'm sure I've written about before (try the search bar). It was an imaginative project that ended up as a major exhibit featured at the Richmond Museum of History. The show is now making its way around the Greater Bay Area to be enjoyed by a wider audience, and most deservedly.

So said, at the book-signing yesterday -- Summer looked over to where I was perched on a library table along the side wall against the windows -- and in answer to a child's question about how she came to write Tales -- "... my friend, Betty, asked me to write about the Wisdom Tree and I wrote a note to myself on a little slip of paper; and over the months have been adding other little notes on little slips of paper about Richmond -- and finally I ended up with this book,

"Richmond Tales - Lost Secrets of the Iron Triangle,"
with illustrations by Miguel Perez.
(from the brochure)

"Richmond Tales, written for 4th and 5th graders, is sure to appeal to a wider audience as the characters learn the history of Richmond, experience cultural differences, and explore the possibilities of Richmond's future. Literature rarely reflects the local experiences of our students in the West Contra Costa County Unified School District. This book seeks to provide relevancy and strengthen students' connection to the community. Undoubtedly, the story reaffirms that our community is powerful and that our students' potential is unlimited."


The book was supported by the school district which purchased 5000 copies to be distributed to all of the fourth and fifth graders throughout the district. Yesterday the library was filled to overflowing with youngsters and their parents listening intently to Summer reading in her warm southern drawl and clutching their copies for autographing later with the lemonade. A big day in the Iron Triangle of Richmond, California.

The book -- through the protagonists, pre-teens Mario and Maisha, through a kind of time capsule trip through the history of this community-- the now decaying historic core of the city (but undergoing rehabilitation) -- from the 2000 years-ago era of the Ohlone Indians when this part of the city was largely made up of hills and wetlands; of the early settlers of the wealthy early Californios, the Mexican and Spanish ranchers; of Rosie the Riveter and the boom of WWII, (and, yes, there is a chapter on the Wisdom Tree), to today as a place of racial and cultural diversity moving quickly to a new 21st Century Green Economy. It's personal yet universal in its themes, and empowering to the lives of young children living in these times of uncertainty and fear so much of the time in a community under constant threat of violence.

And -- buried in one of the chapters is the original thesis, my "Wisdom Tree." It deserves its own book, I insist. A sequel? Meanwhile, this is a truly exciting outcome to just another ordinary conversation between friends.

Posted by Betty Reid Soskin at 9:39 AM