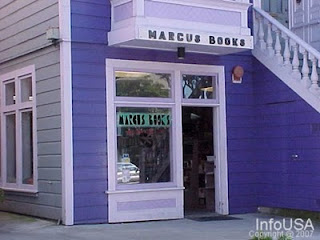 Lay awake most of the night concerned yet excited. It was an epiphany ... .

I was aroused by a disturbing email. The message brought up a response from somewhere deep inside -- a place that I seldom visit these days -- that place where I'm creating life rather than simply reacting to it. Maybe it had something to do with having read, Bill Strickland's, Make the Impossible Possible, (a must read). (And how it pains me to have to admit publicly that I purchased it through Amazon.com.) I, of all people, whose historic small black business is being slowly and painfully overwhelmed into obscurity by the WalMart, ITunes, and BestBuy.

I had only the day before spent the afternoon in our Berkeley store, Reid's Records, at the request of my son, David. He has stepped into his late father's shoes and is a budding promoter of black gospel concerts. Mel Reid and his uncle, Paul Reid (also long deceased), were the pioneers in the field during the 50's-60's.

I rarely visit the store since turning it over to David years ago. One can't do that part-way. It had meant far too much to me, and I couldn't have resisted looking over his shoulder and interfering with his operations. I needed to sever completely from that story, and to begin to create a new one for myself.

The reason for the visit on Wednesday was to share in an interview with David for the San Francisco Chronicle. We will be featured on the cover of the Pink Section for this special edition that will feature 3 related stories on the fate of small black businesses as the lead-in for Black History Month. The occasion is that 2010 is the anniversary of our 65th year in business; probably some kind of record as one of the oldest small black businesses in the country, precarious and struggling still. 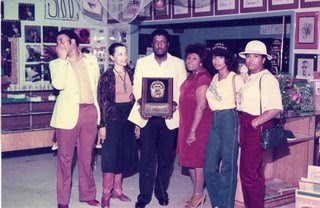 Last night, the email arrived announcing that Marcus Books, a 50 year-old Bay Area institution, is closing. I felt a chill. The Richardson family I've known about as vital contributors to black culture for as long as I can remember. They've been critical as Grios, Archivists, centers of communication for Black intellectuals who have used their two small stores as gathering places for 5 decades; where nationally-known black authors and poets have gathered to share their work with local audiences, and the place that college students and political activists have claimed as a center for inspiration and leadership for as many years as I can recall. (Do visit the Marcus Books website -- will provide the URL when I have a moment -- but now I need to get ready to visit Dorian.)

I learned during Wednesday's interview that Marcus Books would be one of the black businesses featured in the upcoming story. I'd known that it had struggled for years from the same kind of fate that befell us years ago as our clientele began to leave the inner city for the suburbs and beyond, and for reasons I still can't fathom, small isolated black businesses had never "clustered" in the ways that would have created the kind of ethnically-specific cultural and entertainment and retail districts as other minority groups had done (think Chinatown).

But the problem may lie in the nuances; the places where we've not looked beyond the fact that we'd been (theoretically) "freed" to "integrate" into places where formerly we were not welcomed. We lost something extremely important in that process, and it may be time now to re-visit the "why" of that -- and pick up on some of the lessons left unlearned.

Marcus Books was/is so much more than bricks and mortar. The Richardson family that created it gave us something that cannot be contained under a roof. They, as we, created institutions that have taken on lives of their own. Like other small black institutions, they now live communal lives with as much coming from the influences we sent out into the world as from ourselves. Success or failure cannot be described by a bottom line. Were that true it would mean that neither of us would have realized that we'd never get into the Fortune 500 or a seat on Wall Street were we to depend upon that. No. We and other little black family businesses like ours everywhere surely knew that. We all wanted something far more precious. We wanted independence, autonomy, but mostly it was about legacy -- the ability to provide a launching pad for our children. In that place we/they succeeded if only for brief periods and with varying degrees of success, often by the simple fact of not having had enough generations in the marketplace, and while fighting the personal demons that we all have to struggle with. How else would we explain why I'd never even heard of a "Line of Credit" until after I'd left the store and turned it over to David?

That email told of the imminent demise of Marcus Books with the poignant, "what can we do?"

It's time now that we inventory what's "out there" in our communities, nationwide, and set up panels consisting of

marketers, research and development people, inventors, graphic designers, and fine artists, financial analysts (come on J.Z, and Beyonce, and Michael Jordan, Oprah and Tiger, Spike Lee, and our other filmmakers and documentarians, etc.) and (meeting through online software resources) begin to save ourselves and enrich our shared legacy. Let's zap into what's already happening and in embryonic stages of development and there waiting for our support and enthusiasm.

I suspect that -- if there is anyone out there who understands what I'm saying here, it would be the Hip Hop crowd. That's our cutting edge, and they know it. When the schools gave up their music and fine arts curricula that allowed our young to learn and create in an area where natural ability reigns -- leaving them with nothing but their mouths and a beat; they turned that into world-changing Hip Hop culture through introducing Rap into the world as an art form!

We must stop complaining about how others tell our stories and take on the responsibility for telling them ourselves, through our powerful cultural resources. It is this gift that the Richardson family so generously gave to us all -- they gave voice to the great black stories through those they presented over the years with their in-store readings.

And, my thoughts upon waking this morning were, "just why it is that -- when we attempt to 'cluster' into districts, we either are branded as 'blight' or need to be 'integrated' out of existence? Why do we tend to believe that gentrification is okay so long as they allow us a piece of it once improved? And much of that thinking emanates from our own communities as much as from outside its edges. We've learned those negative lessons well, and are still strongly effected by the kind of thinking that destroys all attempts at in-gathering for the sake of our own cultural preservation.

We are a wondrous people, with unexplored potential with much yet to be discovered in and among ourselves.

Let's get this conversation started, folks. Suggest a venue then let the rest of us know just where we can organize online. Contact me at "...email me ..." (the link's up there above the archives and under my photo), but don't wait too long. At my age I have little time to waste!
"Contemporary Black gospel is Jazz come home!"

(slogan from an old Reid's Records newsletter.)
Posted by Betty Reid Soskin at 11:35 AM