Is the question one of re-definition -- businesses or irreplaceable historically significant black institutions?

Whether we survive the times may be dependent upon how our community answers that question.

While watching KQED's "This Week in Northern California" last night, I was suddenly jarred out of my usual lethargic Friday night viewing by the words, "...when we come back we're going to examine the threatened demise of the Bay Area's small black businesses." Would you believe that there on the small screen were the Post Newspapers publisher, Paul Cobb, and another man sitting across from the show's host, Belva Davis, discussing the Marcus Books stores and -- ours, Reid's Records! No warning. Suddenly there we were as the topic of the day. It felt surreal.

My last post was written just as I'd learned of the Richardson's plight, and on the heels of David and I being interviewed by Lee Hildebran for the S.F. Chronicle's upcoming article. Amazing! 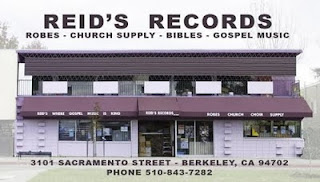 ar outside the range of two tiny struggling black businesses -- we're experiencing, after all, the fate of many small businesses in these changing times -- enterprises of every kind, both large and small, black and white, -- and due to the country's undergoing as violent a shift in its economy as that produced by the birth of the industrial revolution early in the last century; that which came with the change from an agrarian to an industrial society.

The coming of the Information Age was foreseen long ago, during the 90's when I sat in a great convention hall in Silicon Valley as a guest of Seniornet, an online program for elders. I watched in awe as speaker after speaker stood at the lectern with his (and they were all men) little pointer while showing on the giant screen projections of the technological changes already in production and many still to come (no, not yet touch screen, but close). I saw that my little record shop back in Berkeley was obsolete; an anachronism. That the record business as we'd known it was over. Kaput! I watched every presentation of "what shopping will look like in the coming decade" with dread, knowing that it was only a matter of time. I had no idea how to take that message home to my family for whom I'd worked so hard to save the shop.

We came full circle when recently I needed a particular book in order to complete some research for my work. I looked it up on Amazon.com. It was Ann Hagedorn's "Savage Peace; the Year 1919." It listed new at $35 but was also available (also new) at $1.17 in paperback. When it arrived I wondered how that could be? With freight it was still under five dollars. A week or so later, I wanted another copy to give to a colleague and went online again -- this time it was on sale for 87 cents! It is, after all, 543 pages long! It didn't occur to me to check out Marcus Books. This was the Brave New World I'd glimpsed in 1995 and resistance was not even in the script.

Listening and watching last night it occurred to me that what we've contributed to black culture over the decades has been so much more than just being a small business. We've been the purveyors of culture; the archivists, the Grios, and without us, much that is cherished -- that infuses into American culture -- would have been slowly integrated out of existence; diluted until it became meaningless, and recognizable only in the abstract. Without blackness in its purist forms protected in its often humble institutions, the well would soon run dry. Then where in the world would the Michael Bublés, Chris Bodes, and Diana Kralls of the future come from? There would be no Britney Spears without Janet Jackson, and surely no Kristina Aguilera without Whitney Houston. Could we have produced an Elvis, Eric Clapton, Janet Joplin, without Jimmy Hendrix, B.B. King, or Bessie Smith? And so many mainstream musicians owe their fame to James Brown, Billie Holiday, or Dizzy, or Charlie Parker, or Ray Charles. Could there have been a Fred Astaire or Bob Fosse without Bunny Briggs and Honey Coles?

It is not only Marcus Books and Reids Records that serves this critical need, but the many isolated and often marginal small black enterprises that have been the carriers of the legacy without portfolio. Whether by intent or not, collectively, we've been the keepers of the culture, and for that reason if for no other, Marcus Books must be saved -- not as a business -- but as an irreplaceable black institution.

It seems to me that we need to recognize this aspect of our identity, and to try as hard as we can to keep the very essence of who we are alive and thriving by creating arts and entertainment districts in our communities. Places where we can go for replenishment, and where the rest of the world can come to continue to learn from our masters and help us to celebrate ourselves and our incomparable gifts.

It is a tragedy when we have to see and hear ourselves filtered through those we've influenced and trained to the culture simply because of the lack of opportunities and resources to stay alive into the new economy.

I'm still waiting for some feedback, or, at least some idea of where we might have this conversation before it's too late.
Posted by Betty Reid Soskin at 11:54 AM