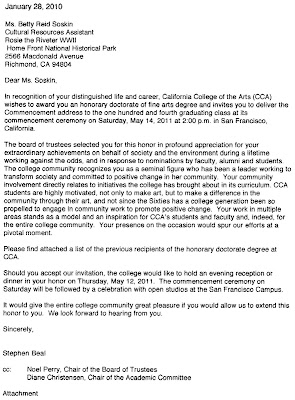 Feels much like the National Women's History Project ceremony in Washington -- the sense of inadequacy ... I was awestruck then, too.

The problem seemed to arise from the fact that, except for President Stephen Beal (whom I met only briefly when appearing on a panel at the Oakland campus), I have no sense of who these "faculty, alumnae, and students" are who selected me for this great honor. Therefore there is no way of my being able to know which Betty they're honoring? Is it really me or is it this developing persona that I'm not always in control of?

Here's how I worked it out:

Forwarded the letter with the attachments (including a list of stunningly impressive earlier recipients -- people like Duke Ellington, Lawrence Halprin, Toni Morrison, Charles Eames, etc.) to about a dozen of my friends; those who've known me for many years and through all of the trials and tribulations over time. They'd know whether I was worthy. I'd wait their response, and then I'd know whether this should be seriously considered, or, if I should send a letter of regrets and a thanks for even being considered. Yes, I know. Tacky.

Almost before I could turn around the responses began to come into my inbox; a universal WOW! No one questioned the wisdom of the choice, and each only wanted to know if they could come, too! It was then that I felt confirmed, and, that this might be fitting after all, and that I'd find a way to fulfill the expectations of these lovely strangers who were involving me in this historic ceremony. And maybe (as Martha suggests) I should be out of uniform and fully into "Betty," which means black crepe suit, pearls, and maybe my lovely antique ivory bracelet Bill brought back from Dharmsala so many years ago; and maybe the beautiful garnet necklace (from Tom 2 years ago) with my burgundy dress ... .

These are my friends who would know. Permission to accept this honor must come from those who know me best, and it has been granted.

Thank you, Dr. Beal from California College of the Arts, Martha from the National Park Service, dear friends Art and Arliss, Barbara and Dion, Tom and Pam and Peter and Tony, and Bob and Margaret, and Steve, Bruce, and Jean and Roger, et al. I even mentioned it on Facebook, testing its reality -- but the most provocative response came from David who said it best in a phone conversation while on the road:

When I protested, "who do you suppose they think I am, David". "They know who you are Mom. You're the only one who doesn't."

Now I need to get back to work and -- at some point -- begin to write a commencement speech. That should take at least until May 12th. I'll write 6,000 drafts -- then at the last minute toss 'em and ad lib the whole thing. Truth requires very little rehearsal, I think. But I suppose every good speaker needs a carefully written speech to throw away.

Photo: Click to enlarge print.
Posted by Betty Reid Soskin at 10:31 AM