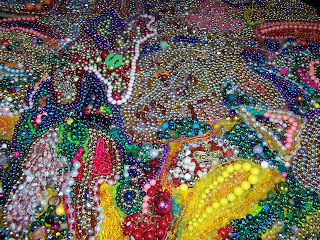 Strange and disturbing thoughts at awakening this morning ... .

There are hints that I may have arrived at one of those transition places; a place for slowing down and peering tentatively around corners ... .

Maybe the pace of life is simply too fast right now ... too fast for what isn't clear.

It started when it occurred to me that I may be cramming more life into my days than my days can hold without an implosion.

Maybe it was the fact that I'm living so much "in the moment" that I rarely look ahead even a few months lest some once-in-a-lifetime experience be overlooked, and I wake one morning only half-alive ... what a frightening thought.

Maybe it comes from knowing that the great honor being bestowed by the California College of the Arts at next spring's Commencement fixes a future time that I'm not used to having to think about. At this age projecting more than a year ahead is a luxury I can ill afford. I'm only now realizing the extent to which I'm able to accept each day as a gift because each day is an end in itself -- dependent upon no other (an attitude I seem to have aged into at some point). I really do go to bed each night feeling relatively fulfilled -- and maybe because I'm living so much in "overtime," that if I don't wake up tomorrow morning, I still have won the game.

Reading back over the past few posts I became aware that were anyone to ask if there's anything that I've not done during my lifetime and that I regret having missed (except for those tango lessons), I'd have a very difficult time finding an answer. On the other hand, I have no sense of living at a frenetic pace or seeking experiences just to satisfy some crushing personal need. To the contrary, I tend to live life in a constant state of surprise; as one grand improvisation!

Maybe those brief paragraphs I read from Bruce Frankel's book forced a look at my life from a third set of eyes. It was a strange experience; not at all like reading back my own words, but from some other perspective; an unfamiliar picture of myself -- not "through the glass darkly," but from a new lens; a view previously unexplored. Makes me wonder just how much distortion is present in my self-image ... .

Besides all that, by next year's Commencement I might not remember how to tie my own shoes, or, just where in the world I left my car keys -- or my car?


Photo: One of Dorian's wall sculptures created with Mardi Gras beads. It's quite lovely as you can see, and may illustrate an example of her mother's orderly confusion.