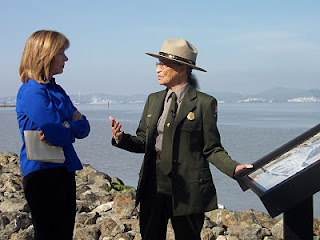 Today's interview went well, I think. Since I've learned not to watch the finished product ... the work has become easier... .

Those two hours will be edited down to 3 minutes for tomorrow's evening news on KPIX, Channel Five out of San Francisco.

Today's interview at Port Chicago with Ann Notarangelo was comfortable. She is a fine interviewer. When I'm telling the stories to someone who has never heard them, they are freshened for me. When anticipating a new assignment at this site, it feels as if I can never provide the words that address the magnitude of what happened here. Who on earth could? And for me, personally, it's as if all of the life has been talked out of the few words of my ordinary experience of entertaining those few young sailors whom I couldn't identify had I met them on the street the very next day -- had they lived -- words that have grown dull from overuse. But then it changes ... when I see eyes light up with interest ... and the words come alive again.

Each time I'm at the memorial site and re-positioned in that deceptively tranquil setting, I can feel the presence of the unseen, and the stories flow and -- it's almost as though we've brought the life with us to this monument ... to those lost in that unspeakable tragedy... 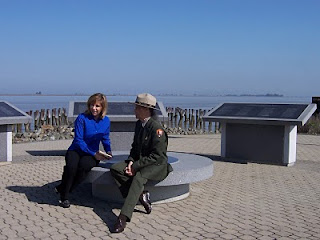 Guiding the bus tours at the Rosie the Riveter scattered sites in Richmond (maybe 25 miles south), the experience is quite different. There's a feeling of awe and reverence here that's missing in the place where the narrative tells of the round-the-clock frenetic laboring force that morphed into continuing decades of social change and adjustments that re-shaped the nation in so many ways.

There's a feeling at Port Chicago that on July 17, 1944, Earth stopped orbiting the sun for an instant ... that the unspeakable occurred and that the horror remains suspended in the air here -- that thing that one can still sense in the stillness ... and, for me, something forever unresolved ... .

Ann asked a question that remained with me on the drive home. I can't even recall her exact words, but it started a line of thought that still clings ... I've not worked it through enough to try to express it -- at least not yet -- but it was an insight that for some reason feels terribly important; a breakthrough of some sort.

I wonder if it had anything to do with great blue herons -- another lingering fragment of a thought that slipped into mind for some reason ... ?

Maybe one day I will watch this one.
Posted by Betty Reid Soskin at 8:36 PM