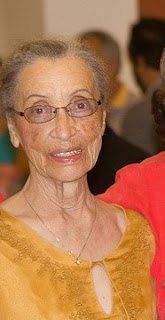 That is if we can still find enough hair to style!  Maybe it's time to just cut it all off and face the truth that there are just so many hair follicles to each lifetime, and at 89 I've outlived my allotment.
Posted by Betty Reid Soskin at 7:42 PM