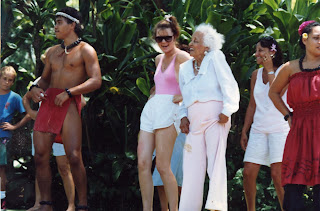 As one might guess, as the day of Commencement approaches -- the tension grows ... .

How on earth can one ever measure up to such expectations?  But then maybe it is only I, myself, who is setting those expectations, right?  Maybe I've already reached whatever heights others were setting for me, which would suggest their rationale for choosing me for this great honor in the first place.  But then the very fact that they're sending a limo to drive me from home and back announces their expectations in a fairly serious way, does it not?

The big decisions have now been made; the "what to wear" and "what to say" are now set in stone.  It will be something already on hand and previously worn and guaranteed "comfortable" so that I don't have to think about appearances.  That will leave only the commencement address to concern myself with.  The title remains unchanged, "Thumb prints, gate posts, and bookends" it shall be.  Let's hope that I can weave them successfully into whatever final form they take.  At this point I'm happy to allow the content to continue to deepen and mellow.  I'm sure that I've given this talk over and over again in many settings -- in my dreams.  I'm experiencing a very active dream life from the disheveled state of the bedding in the mornings; though I'm noticing that I wake more at peace in the past few days -- a serenity that may indicate that the work is nearly done.

As foolish as it may sound, I'm reluctant to try to capture it into a paper for fear that I'll be tempted to simply read it instead of delivering the words as they present themselves at that moment at the lectern.  I know that I'm best when I can see the faces and look into the eyes of an audience; and I also know that about five minutes into my presentation, all of the paralyzing fear vanishes, and that I'll be safely home until just before the ending, with just a millisecond of panic in the silence just before the audience responds.

My colleague, Lucien, emailed that -- as she was at the StairMaster at her gym yesterday -- reading a magazine to while away the time (it was Real Simple Living) -- she happened upon a quote from me.  I vaguely recalled a writer calling from New York a few months ago (having been referred by Bruce Frankel, author of How Should I Spend the Rest of My Life).  She wanted a quote on aging to add to others from other older women whom she'd also interviewed for the article.  (It was jarring to note that those other older women were in their fifties and sixties -- the age of my children!)  By now it all seems a part of the job and a natural request that I can accomplish without losing a beat before returning to whatever I was in the middle of before my phone rang... .

Then, a few days ago a request came that seemed more important, and in keeping with my new found status as a resource in areas far beyond my ranger-ing.  This one caught my attention.   I've been invited to interview Isabel Wilkerson, Pulitzer prizewinning author of the brilliant "The Warmth of Others Suns"and then write an article for publication.  In a kind of rubber-hitting-the-road moment, I realized that it is quite possible that I'm being invited to participate just a mite above my current level of competence, and that I need to leave that kind of journalism to the journalists.  I lucked out with that article published in the California Historian, and this may be one of those times when I will over-reach and in so doing, risk this heady moment when I'm soaring far above my own expectations when I only need to bask in the rapture of having done so!

Since last weekend my schedule of activities included;
Life is good on this Mother's Day on this planet.


Photo:  Lottie Allen Charbonnet, my mother at 95.  She was partying at a luau in Hawaii when this photo was taken.  She lived to see her 101st birthday, and as you can see by this picture,  savored life despite the hardships her generation endured.
Posted by Betty Reid Soskin at 12:16 PM