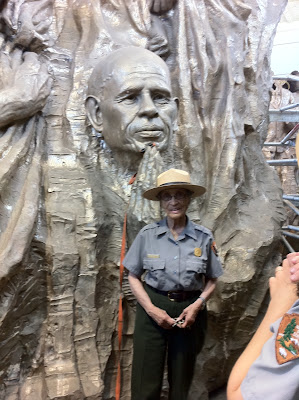 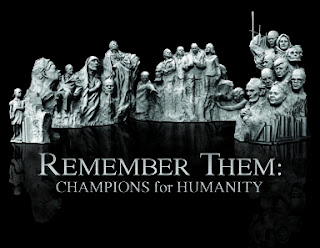 The sculptor's name is Mario Chiodo, and his work is breathtaking  ... !

... a visit to his Oakland studio on Thursday proved to be absolutely awe-inspiring.  The figure shown here is the head of Thich Nhat Hanh, Buddhist Monk, and but one of the many figures who, together, make up the elements in this magnificent sculpture to be installed in Henry J. Kaiser Park in downtown Oakland on September 6th.  This work has been ten years in the making, and the first phase is now nearing completion.

It stands 30' tall, and we were able to see the first of the four elements in the final stages of creation; being cast in bronze.  This was a visit to the foundry where that work is in progress.

Another of the elements is a depiction of Maya Angelou (below), with little Ruby Bridges of the New Orleans school desegregation struggles standing below at the edge of this photo on the far left. 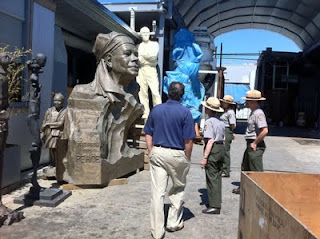 Standing in the presence of these imposing figures was overwhelming.  There are -- at this stage, 25 in all, and another ring of local "extraordinary ordinary" people (not yet created) will accompany those shown in the original piece.  Among the rest of the original cast are Gandhi, Nelson Mandela, Chief Joseph, Mother Teresa, Winston Churchill, Martin Luther and Coretta Scott King, Rosa Parks, Franklin Delano Roosevelt, Cesar Chavez, Helen Keller, Harvey Milk, Henry J. Kaiser, Ansel Hall, Abraham Lincoln, Malcolm X, and others.  Chiodo's concept posits that these were ordinary people of every race and ethnicity who rose to make extraordinary contributions to serve all of humanity, and there is resonance in this year's Home Front Festival -- where -- coincidentally, we'd quite independently fashioned the concept of "Extraordinary Ordinary People" to serve as the theme of this year's mid-October festival.  It's almost too good to be true, though obviously an idea whose time has come.  But how do we make the connections?  Which is why we visited Mario's studio, to meet him, and to try to figure out just how that might be ... .

What an amazing day of discovery and awe in the presence of genius!

Note:  For more information, visit Mario Chiodo's website, or that of "Remember Them, Champions for Humanity."
Posted by Betty Reid Soskin at 3:48 PM