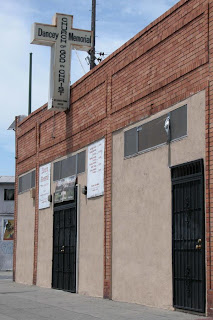 Black History Week at Dancey Memorial held a few surprises after all ...

Last Sunday I was scheduled to speak at a small heavily-armored storefront church in heart of the Black community in the flatlands of East Oakland.  The occasion was their annual program and I was the keynoter.  Arrived on time and just a bit fazed by the printed program which listed about 90 minutes worth of "acts" with my portion coming at the end.  Afterwards I would be rushing home to take Dorian out for a long-planned birthday dinner.  But that wouldn't happen until after some praise singing; opening words by the pastor, Reverend Joe Nobles, who radiated love and caring; introductions all around by the traditional shaking of hands with other congregants, a few remarks by two city councilpersons, the usual recitations of the words of Dr. King; poems by Maya Angelou;  facts about black inventors and scientists;  a praise dance by a young man, more praise singing -- all very warm and stirring with beaming parents urging applause with continuing words of encouragement.  The performers were the children.  In fact most of my audience would be somewhere between the ages of 5 and 15, as it turned out, with parents and grandparents sprinkled generously among them.

It seemed a sign of the times, somehow, that listed as the "Program Mover" was Detective Terrance Montigue of the Alameda County Sheriff's Office.

Now, you need to know that -- when possible -- I've learned to re-direct all such requests for talks to the younger rangers of our staff in the belief that the age difference is simply too great between elementary school children and me, and that the cause is better served by those with fewer years and less wear on their psyches.  Even high-schoolers are sometimes a challenge, though I've found some success on occasion.  I was looking out on my greatest nightmare! I was simply not prepared for this -- but as it turned out -- there would be plenty of time to figure out just how I would handle the relating of 70 year-old history of a park dedicated to the emancipation of women into the nation's workforce to children who probably come from single parent households headed by women.  How was this going to be made relevant to today's children; kids who probably couldn't recall when their moms didn't work as a matter of family survival?

After awhile the parade of youngsters standing at the microphone -- proudly reciting the all too familiar words of African American icons -- it came to me.  I was prepared to show my short "Of Lost Conversations" DVD which would surely catch the attention of the grownups in that congregation, but I would talk to the children about heroes.  Of course!  And, despite the fact that there was far too much light in the room for the audience to see the images projected on the wall, fortunately the narration is where most of the power of the piece lies, anyway, so it mattered little.  It's hard to recapture now because the words had come spontaneously without prior thought, and I'm not sure just how much of this was actually said, and how much was improved upon on the thoughtful drive home.  Suddenly I'd found a way to speak with children and to be relevant to their lives while interpreting our park.


I told them that all of those they've spoken of in their program today had been  children like themselves -- kids who had no idea while growing up that they would someday be seen as heroes by the world.  I told them that children were only grownups who hadn't yet grown into their potential.  I spoke of how my generation had met the challenge of its day by building those 747 ships in 3 years and 8 months -- therefore turning around the course of a great war.  I told them that they would have to meet the challenge of their day -- discovering renewable sources of energy; rising sea levels, and climate change -- and that the "heroes" who would discover just how to do that might be sitting right next to them this day in this sanctuary.  Or that hero may even be you.  That Henry J. Kaiser was an 8th grade dropout cement contractor who'd never built a ship, but dreamed of a way to revolutionize shipbuilding and found a way to do it with those he'd brought into his workforce from mostly rural areas of the South - many of whom were people who looked just like us -- quite possibly their grandparents and great-grandparents-- who had never before welded or riveted but who learned to do a tiny part of a huge job and, together, they made history.

The children were all-attention.  They were engaged in the story.  My talk was over in about 10-15 minutes.  Pastor Nobles followed me out onto the street to walk me to my car suggesting on the way that I might think about addressing their annual district-wide convention in the Fall.

I brought their printed program home to post in my office cubicle as a reminder of the day that I found my voice with children in a Black History Month program at Dancey Memorial Church.

Looking forward to addressing that convention in the Fall.
Posted by Betty Reid Soskin at 6:42 PM