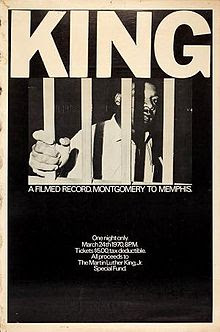 Every now and then I hit a period that is so murky -- and so troubling that there is a reluctance to put it to words ... this is one of those times ... .

It started with the image of our soldiers defiling the remains of those Afghan warriors, followed by the burning of the Koran in an Islamic nation where the act would surely ignite fury.  It was so difficult to connect the act with all that we profess to stand for, yet there were no surprises.  Why not?  I've grown used to the dehumanization of the war machine that we've become, and, along with the crowd -- I paid lip service to the slow devolution of what I'd known as 'patriotism' since childhood -- and in its place something I just didn't recognize had come into being.  Was it that my shock level had dropped to a place where the only response was to close it all out and numb myself into complacency?

One recent late night it began to sort itself out.  I sat alone at my computer watching a special commemorative edition of "King, a Filmed Record:  Montgomery to Memphis."  I thought I remembered it  all -- having lived through it -- but the horror freshened as the years dropped away -- and the experience of the times achingly relived.  The film was shown in selected theaters but one night, I'm told, and it has been unavailable since that time.

The reviews at the time read:


"A piece of history of immense power."
- Los Angeles Times -

"It is the record of black peoples growth in pride and love of
America, played against a background of animal savagery,
swastikas and leather coated storm troopers."
- Baltimore African American -

"The documentary footage is stunning ... The events are allowed
to speak for themselves.  The sound track bursts with vitality ...
and, most thrilling of all, the speeches of the man himself."
- New York Times-

My son, Bob, learned that it's been re-released and is available on the Internet and suggested that it was the best account of the struggle that he'd seen.  I ordered a copy and watched it in awe and in so doing -- allowed feelings of fear and fascination to be revived.  For days I've been unable to think of little else.

What came clear for me in the process was that there is no doubt in my mind that those angry men who were opposing the King peace marchers from the sidelines on the streets of Memphis, Selma, Jackson, Mississippi, yes, and Chicago, were capable of the horrific atrocities that we're seeing in today's headlines.

At what point will white supremacy be seen as a matter of national security?  That's the piece that's been missing from the national debate.  This is what we've not had the courage nor the willingness to face up to as a nation.  A wise teacher once told me that most cultures have "truths" for which they are willing to fight and die but by which they refuse to live.  Cynical?  I'm not so sure.

This week's cold-blooded slaying of 16 unarmed Afghan people by an Army sergeant husband and father threatened the entire course of a questionable war and the fate of our armed forces remaining there.  Those shrieking crowds on the streets of our cities 40 years ago were the threat to the lives of King and his followers who were peaceably demonstrating for the right to vote.  That seething mob was obviously energized by feelings of entitlement which derived by birthright from their white skins.  It was chilling to watch that physical struggle -- lo these many years later -- and to see the legacy of that hatred being played out still in the places where we're "on the ground" in the interest of "spreading democracy."

Those ghosts are still haunting us.  Echoes of it ring out from the encoded language of the presidential primaries.  "We've got to take the country back!" and at any cost, apparently, and from whom?  It's more than racism.  It's by now embedded in the DNA of white America, and is a mental disease that is threatening us all.  It's the unspoken reality of white entitlement that pervades our national and international relations, to our peril. it seems.

We've come a long way in those much-needed conversations on the subject of race, but I find myself wondering if we still have the time and the inclination to go the rest of the way toward liberty and justice for all?  Our national survival may well depend upon it.
Posted by Betty Reid Soskin at 12:44 PM