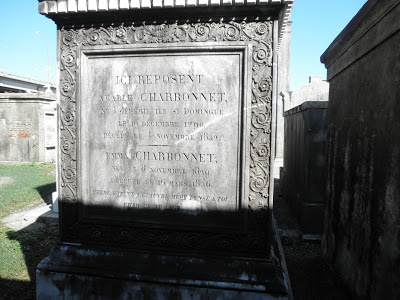 ... Paul, Shirley, and I searched in vain on Sunday morning.  We arrived at the wrong St. Louis Cemetery (there are four), for the tomb of our Charbonnet ancestor-in-common; the elusive Amable -- whose history involves some years in Santo Domingo (now known as Haiti) both during and after the Revolution in the early 1800s.  According to Paul's narrative, he was apparently quite comfortable living among the native population, so returned  to spend at least a part of his life on the island before his eventual return to New Orleans.

Amable was married for a time to a French wife, but took up life with my ancestor, Marie Beaulieu, (a mulatto enslaved woman) with whom he fathered a separate family -- here's where the Charbonnets went to "living color" somewhere around the mid-1800s.  It is of interest to me that, according to the records, Marie lived to the age of 104.

On Sunday we arrived to find that the cemetery was closed for the day, and that we'd need to come back on Wednesday, prior to boarding time at United Airlines.

After some hours spent searching, Paul felt "summoned," just as we were about to give up what was obviously a failed odyssey.  He called out to us that, indeed, the protective iron fence -- which had been our clue to identifying the tomb had disappeared -- obviously a victim of Time -- yet it was evident from the inscription that here lay Amable Charbonnet, b. 1790.   His daughter, Emma, a girl only 7 year's old, shared his burial place.

The grave had suffered years of neglect and  surely had suffered the effects of Katrina, but its beauty was still awesome.  It was carved of white marble and was created in Paris.  The artist's signature was prominent on the front of the tomb, and one can only wonder who was responsible for commissioning this work of art?  Did Amable order it prior to his death?  It would have been brought by ship, of course, but that would have been some years after his demise.

Our cousin, Armand Charbonnet (of the Charbonnet-Labat Funeral Home -- about a two blocks away from the cemetery) -- explained that -- from the appearance of the grave,  Amable's body had been lowered into the ground, and the tomb added at a later time.

It was a moment that will be remembered always.  After centuries, the Charbonnets are now one ... and it appears that I've become the matriarch of a legendary American Family.
Posted by Betty Reid Soskin at 10:10 PM