Sunday has progressed far enough along that the emotional storm may have subsided ... 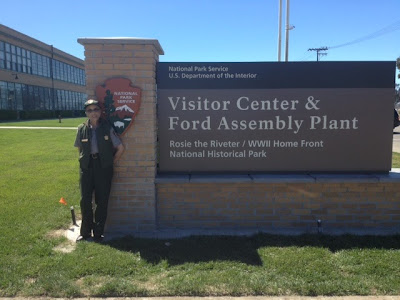 Remembered how delighted I was on Friday on approaching the Ford building to discover that our maintenance crew (Thanks Randy, Brian, and Ken) had finally completed the installation of a new grand entrance sign for the Visitors Center.

It's impressive -- standing 7' x 14' in matching brick and large enough to not be dwarfed by this quarter mile-long amazing architectural wonder designed by Architect Albert Kahn and built during the years 1929 and 1931 by auto magnate Henry Ford to assemble Model A's.   The Ford Assembly Plant has been restored to its original splendor by Orton Development Corporation.  Our NPS Visitors Education Center stands behind this structure in the old oil house that supplied the energy for the building and now holds the exhibits related to the WWII Home Front; the little theater where we've established programming based on that history;  as well as stories of this city and across the nation of that era as lived by an "At War!" America.

The Ford Assembly building was converted to assembling tanks and jeeps during WWII.  Many of today's Richmond citizens descend from that heroic generation.  When combined with the 4 shipyards built by Henry J. Kaiser -- Henry Ford and the Santa Fe Railroads formed the basis of the city's defense-related industries.  There were 55 other such enterprises scattered throughout Richmond acting as subcontractors to those 3 giants who participated in the major corporate world of Roosevelt's "Arsenal of Democracy".


Wish I could pin-point the source of my uneasiness ... .