Escape back into my old world ... spent yesterday in Sacramento with my former boss and former Assemblywoman Dion Aroner ...

... and I'd forgotten what a pressure cooker that life is!  Since leaving the legislature Dion has become a powerful lobbyist (the best kind) who spends at least 3 days/wk and sometimes more in the Capitol -- meeting with legislators, old friends, reps from corporations and unions, and -- like yesterday -- participating in social events that further her (and our) causes.

The pace of life in those hallways and offices is unbelievably and awesomely fast!  I'd forgotten.  Several times during our time together I found myself sitting in (another former boss) Senator Loni Hancock's outer office while Dion was conferring with any number of people as she crossed them off her to-do list.  Loni's scheduler stopped by the reception desk to go over airline reservations for tomorrow; a union lobbyist popped in to press for time with Loni's Chief of Staff, only to be cautioned that "his people" were being too aggressive, and that urgent conversation was occurring less than 3 steps from my knees as I sat leafing through a magazine trying to look invisible.  A string of messengers from other offices kept popping in the door to drop off documents and memos into the In Box fixed to the wall in a place where they didn't need to even enter the room fully, but just reach in and breathlessly move on.  The numbers of men in 3-piece business suits and ties -- women in "business casual" as well -- all demanding attention and "time, time, time!" The corridors are alive with lobbyists and their targets -- legislative aides, attorneys, wanna-be candidates for public office next time around -- so that several 5-sentence  micro "meetings" occurred between our stepping out of Loni's office and getting in and out of the elevator to leave the Capitol building!  No exposure is wasted.

This is what "making sausage" looks like.  I'd forgotten. 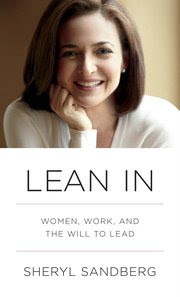 I'd been invited by Dion to attend a luncheon officially ushering in a speaker series sponsored by the 34 members of the Women's Caucus of the California State Legislature.  The lead-off for the series was Facebook CEO Sheryl Sandberg whose recently-published book has been on the NY Times bestseller's list for many weeks and is still climbing.

Her message to her audience held few surprises, and it wouldn't surprise me in the least if this attractive and personable young woman isn't aiming for a life of public service.  Governor?  State Senator?  Perhaps, but since she's at the top of the food chain in the corporate world -- and (obviously) is still reaching for the brass ring -- I'd bet on a run for public office in the not too distant future.

Her book title, "LEAN IN", is the running theme of her talks, and it got me to wondering if that wasn't where we made our mistake (Sojourner Truth, Harriet Tubman, Fannie Lou Hamer, Rosa Parks, Mary McLeod Bethune, etc.,) all must have been leaning out!

... but it was good to be with my dear friend, Dion, on the long drive to and from Sacramento -- good talk; great rapport; so glad to feel the comfort of being with a grown-up again.  It feels like it's been years!