Just returned after three days of rest on the scenic north coast of Mendocino ... 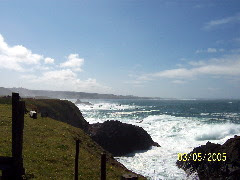 ... but I'm still feeling "coiled," and tense, and the rest I was seeking failed to kick in as anticipated.  Maybe it had to do with the fact that -- instead of driving up Route 128 through the scenic Anderson Valley which ends with a burst of ocean breakers at the merge with Coast Highway 1 -- at the crest -- I'd decided at Cloverdale to continue on the faster and less curvy inland Highway 101 past Ukiah to Willits.  The dramatic first sight of the Pacific where the Navarro river bed widens as it empties into the sea -- and which gives such a burst of whatever it is that happens at that point on the drive where you suddenly move beyond the redwood forest and meet the wisps of fog carrying the scent of sea foam ... the roar of breakers against those monstrous rocks ... I missed it all this time.

... and for all his loving effort, poor Tom's gracious attempts at satisfying my every need went unrewarded.  The usual drive to Fort Bragg accompanied by his running commentary about the history; the current economic conditions; the small businesses now gone; the beautiful homes in the historic districts where the lumber barons once reigned; all reduced this time to little more than inevitable change produced by time ... and all met with my silence -- something I was increasingly aware of.

Maybe how I enter Highway 1 is an essential element in this particular journey, and perhaps it was lost and therefore something in my imagination went unfulfilled.  I just don't know ... but something of importance was missing and never recovered. 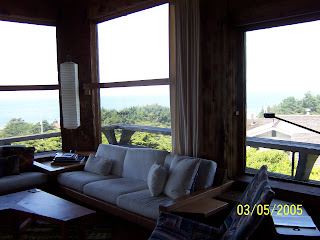 I did meet two new friends, a writer and her husband, a woodworker artisan/photographer with whom I experienced similar feelings on January 20 of 2009 at the presidential inauguration.  It was on the Capitol Mall that I met over 2 million new best friends, any one of whom I could begin a conversation in the middle of the sixth paragraph.  Norma and Les make that 2 million and two, I think.  And I'm not certain how I know that, but I'd been reading Norma Watkins' online journal for months now as the result of Tom's sending the link, and have developed the trust that one feels when you encounter someone whose great questions match yours; and Norma is a white southerner whose history should have been antithetical to all that I believe in.  She hails from Mississippi, and lived for a significant time in Florida.  Unlikely?  Right.  But there you have it.  In her written words there is harmony with my thoughts and life lessons learned over decades.  And -- that feeling that our first conversation could start in the middle of the fourteenth paragraph!

Still not "uncoiled," but today is Sunday and tomorrow is a holiday so I still have 48 hours to try to recapture a sense of serenity that -- at least over the past weeks -- has been lost ...

... but next Sunday, September 7th, holds another memorial service, this time for Mary Towns Adams, a lifelong friend, and with it a deepening sense of urgency that may be becoming terminal now ... .

Could this be the answer for the general feeling of restiveness?