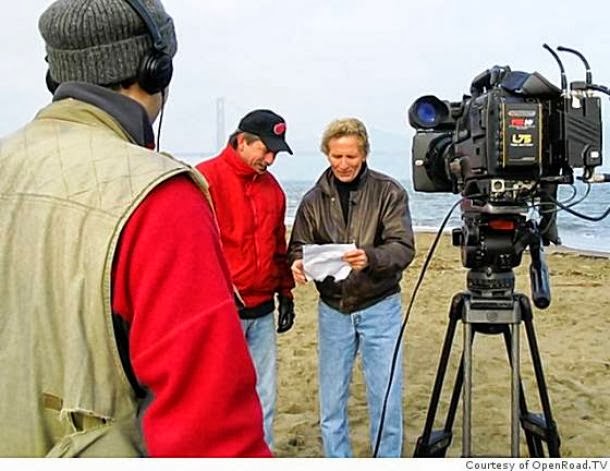 Recently -- while sitting at my computer -- the phone rang and the familiar voice of our park superintendent came on ...

"Betty?"  I answered, "yes?"  Tom answered in a strangely tentative voice, "I just received a call that you had died."  This explained the tone.  He was in shock -- both at the news, and at my unexpected voice on the other end of the line.  I suppose he was expecting my "next of kin" to be answering.

The call was a short one.  I immediately hung up.  My first thought being the need to call my family before the rumor reached them and needlessly caused havoc!

I was able to toss the incident off swiftly and return to my work, but over the next few days the thought would return both to me -- and I'm sure, to Tom.

A week or two later he called to ask if I could be free to meet with him and several others to discuss the making of a film that would capture my park history -- since it also would serve as the history of this national park's earliest days.  In effect, most of that history has been embedded in this blog since I became associated with the National Park Service as a consultant during the first years of this journal's creation (September of 2003).

By now it's far too lengthy to serve in its present form, but with major editing, there are enough relevant posts to at least get the flavor of the early days through the subjective eyes and ears of at least this ranger.

But this is something quite different:

Over the next several months, much of my work (bus tours, theater presentations, outside speaking events, etc.) will be filmed for the purpose of archiving my experiences over the past decade as related to Rosie the Riveter/WWII Home Front National Historical Park.

The first of those filmings occurred last Wednesday when Producer Doug McConnell (Bay Area Backroads) and cameraman, Carl Bidleman, arrived with their cameras and documented my two-and-a-half hour bus tour of the scattered sites throughout the city which defines this park.  Once "wired up," about a dozen visitors boarded and we were off to Kaiser shipyard 3 and the SS Red Oak Victory -- to end up at the Rosie the Riveter Memorial before returning to the Visitors Center for a showing of the 15-minute orientation film, "Home Front Heroes," and my usual talk which completes the experience by filling in any gaps in the story that might have been missed by my improvised interpretation.  Those bus tours occur twice-monthly, and are generally booked at least two months in advance.  Right now we're booking April.  They're by reservation, only (510.232.5050).

Later in the day, as I felt the onset of those familiar feelings of emotional fatigue that come in the first few hours after a bus tour, I found myself becoming quietly aware that we're really all preparing for the inevitable; the day in the not to distant future when Tom's awesomely disturbing telephone call will become a reality, and I won't be here to answer.

It will be some loving "next of kin."