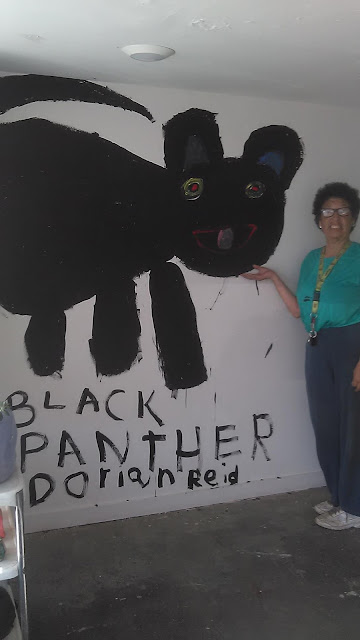 Call came from the editor of a publication in which my life story will be included in September  ... .

... she wanted to fact-check a few things, and her first question was -- "I was a bag lady for the Black Panthers!"  Of course I said, yes, that I'd said that (probably in the Bancroft Library oral history at the university), and it was technically true, but didn't come close to telling the whole story.

What was being referred to was the fact that I raised funds among my friends and church members in order to help to fund the work of the Panthers, and delivered them to Kathleen and Eldridge Cleaver at their San Francisco apartment on Oak Street.  What I did not say was that I'd been driven there by our late  Rev. Aron Gilmartin, pastor of the Mt. Diablo Unitarian Universalist Church.  He didn't hesitate picking me up in his little Volkswagen to make the delivery.  That was life in the Sixties.  You were either a part of the problem or a part of the solution, and we took that very seriously.  I'd drive into the city to march with the Panthers on the Alameda County courthouse steps many a day in order to fulfill that self-imposed obligation.

This was in my pretty little brown Doris Day with the faux wood-paneled station wagon period, and I faithfully lived up to the image.

I'd decided that -- though I was living in the suburbs at the time -- far away from the action -- with the Oakland hills dividing the flat lands of the inner city from the "(sur)real" world, there was a role to be played by the black middle class (of which there were few where we lived).  White liberals who were stirred by the struggle as it was being played out on the streets of the Greater Bay Area, and with whom I had credibility, were asking me for information about what was going on beyond the hills, and as long as that was true I needed to be informed.  I had access into the Movement, and they didn't.  I saw it as my duty to drive to where the action was in order to tap into the power that I had access to where I was.  It was those same great friends and allies who would support me through the next decade -- sometimes at the national level.  We were all being educated through my involvement.  It was a heady time, and some of the lessons learned in those years are what fuels my work today.

No one was going to grant power to a black man standing on the corner with a brick in his hand, but I was choking on it.   I could be a conduit to power, and I knew it. At that time some of my friends were among the most effective of those in political leadership.  The mayor of the town, Doug Page, was a member of my church, and I could probably have parked my car on the City Hall lawn and not been ticketed.

And,  I'm probably living proof that the Black Panthers were, at heart, non-violent.

I recall one of those demonstrations when -- dressed in my beige pleated skirt with cashmere sweater with pearls and tawny hip-length suede jacket --  I was marching along passionately while loudly yelling, "Free Huey Newton!" with the rest of the crowd when the chant turned unexpectedly into, "Off the Pigs!  Off the Pigs!"  Appalled, I marched straight up to the front of the demonstration in my spiffy alligator pumps to where some of the leaders were gathered and loudly announced, ".. if you don't make them stop yelling those awful words right this instant,  I'm going to leave and never come back!"  That someone didn't make quick work of me right on the spot showed unbelievable restraint on the part of the black-leather-jacketed brothas, and proof that those awesome Black Panthers were not without a sense of humor!

From that day forward I figured that my code name in the Black Revolution should have been Chicken Little!


note:  ... and apparently Dorian is also evolving.  She is showing political awareness that must have been acquired over the years.  Stephen Sondheim was right, "Children will listen."  These sketches turned up in the National Arts and Disabilities (NIAD) show today, to serve as a reminder of those days. For those new to my writings, Dorrie is my mentally-retarded daughter.