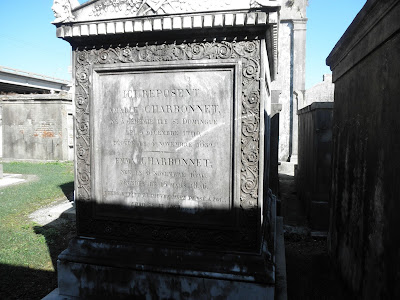 First, received an email from cousin Paul Charbonnet this week that connected with recent events in an unexpected way.

I suspect that he was half joking, but underneath it fit in nicely with a new avenue of thought that's opened up due to a number of proposals that I've been considering of late.

Several filmmakers have contacted me inquiring about the possibility of our entering into negotiations for filming my life story.

At first I considered the inquiries frivolous, and after allowing the ego satisfaction of having anyone consider my story important enough for documenting -- I'd unceremoniously send them to the trash without much further thought.

Yet over past weeks I've begun to give that some serious thought, and once that happened -- all bets were off, and I'm now really beginning to look at my life through a wider lens.

Paul's email announced that he'd been in touch with the Diocese of New Orleans about the possible restoration and upkeep of Amable's tomb (1790-1839), and that he'd learned that -- for a fee -- that could be arranged.  I'd suggested in a recent email exchange that I might be interested in sending out word to my wing of the Charbonnet family to see if we could share the cost in order to honor our earliest ancestor's place in our creation.

Paul tells me that while he is not a direct descendant of our ancestor-in-common  (his wing remained white while mine crossed over through Amable's love, Melite Beaulieu -- a mulatto slave with whom he fathered my great-grandfather, Dorson) -- I am, and am therefore eligible to be interred in that tomb along with him, and his 6 year-old daughter, Emma.

Paul felt that this could make a fine and appropriate ending to our great southern American family epic, but I've got a commitment to pay off a 30 year mortgage, and I plan to honor that fully before leaving this dimension.  I'm figuring that I've got at least 15 more years before that gets done.  Let's see, next month I'll be 94 ... .

... and I've lived almost my entire life on the Left Coast, and someone who remained in New Orleans over the centuries should have that honor.

But it's worthy of an Isabel Allende novel, wouldn't you think?