It was a most memorable moment in all of the proceedings of those 3 magical days ...  a moment that threatened to compete with even the widely photographed presidential hug on that stage ... . 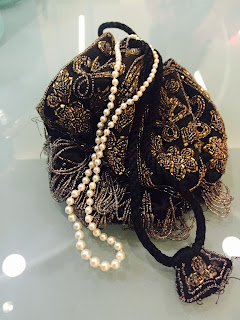 ... and it had little to do with the historic tree-lighting ceremony, but of family, and requires some review, but it's worth that, I think.

It unfolded just moments before the girls and I were scheduled to meet Martha in the hotel lobby to leave for the National tree-lighting ceremony where we would meet the First Family.


Just as we were moving toward the door of our hotel room, one of the girls looked at the other, and saying ...  "oh, we almost forgot."  So saying Alyana turned back and dove into her luggage and came up with the exquisite little silk beaded evening bag that I'd given to their elder sister some time ago.  Along with the gift I'd included a letter explaining that this was given to Aunt Emily, eldest daughter of my great-grandmother Leontine, by her husband, Dr. Raleigh Coker, on the occasion of their 35th wedding anniversary.  It carries a Paris label, so was a treasured artifact.  It was later given by Aunt Emily to my mother's younger sister, Vivian,  upon her graduation.  Vivian had lived with the childless couple through her years at Xavier.  It was Aunt Emily who provided a home for a number of Mamma's grandchildren as they moved out of St. James Parish to pursue educations and to start lives in New Orleans.

Years later Aunt Vivian would present the little treasure to me along with the story of its beginnings.

When my son, David's, eldest daughter grew into (what I'd hoped was) enough maturity to understand its value, I wrote a letter explaining its origin, wrapped it carefully in tissue, and passed the beautiful little gift along to my granddaughter, Kokee Amanda Reid.  By now, though never spoken of, it had evolved into a woman's ritual of love that we were all a part of. 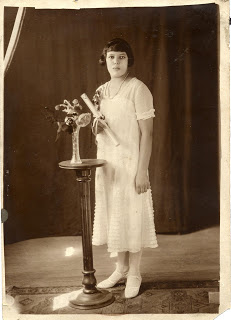 On another track; in Freedom Summer of 1964,  we were living in the suburbs about 12 miles out of the city -- where I was a member of the Unitarian Universalist church.  It was at Fellowship status, with about 25 young families daring to form the beginnings toward full church status.

Among my friends (white) was a father, Don Sanford, who'd lost his wife, the mother of two young daughters when the girls were quite young.  Over the years, Susan, his eldest daughter, and a university student then about 18 --  having been raised by a wise father in a politically liberal environment -- was now ready to try her wings as a volunteer teacher in a Freedom School in Canton, Mississippi, as a member of SNCC.  Susan was a student at the University  and -- along with others was giving up her education for awhile in order to become a part of the struggle for civil and human rights -- the challenge of her generation.

I believe I may have had Susan as a student in my religious education class at the Mt. Diablo Unitarian church.  Connections with the Sanford family were only casual, but it's interesting to note that my deepest involvement in the Civil Rights struggles of the Sixties was largely in concert with the white social activist members of my church and their children.  That congregation went through the Civil Rights Revolution right along with me, and facilitated my participation in the struggle at the national level.

This was happening at a moment in my own history when my marriage was slowly disintegrating, and the pearls that you see were the symbol of the need for re-consecration.  The little necklace had been the gift from my young husband on our wedding day, May 24, 1942.

The evening before Susan was to leave for the hostile deep South, I was invited by Don to join the family for a farewell dinner.  It was then that I gave the pearls to Susan with the words, "... I'd love for you to wear this under your tee shirts as you work -- to keep you safe, and to give me a presence in this important undertaking."  There was no possibility of my joining that struggle since I had four young children needing care.  This struggle was far beyond my reach.  At the end of summer Sue returned home and the pearls were returned to me, having completed their work successfully.

When Alyana graduated from high school, I wrote a letter explaining the story of the little necklace without a feeling that anyone could possibly understand fully what they meant to me.  How could one so young and uninformed possibly know?  Summer of '64 was hardly a footnote by now, but at least I was passing what I believed to be a connection that one day -- maybe -- the significance would reveal itself to her.


The three girls, Alyana, Tamaya, and Kokee, had apparently gotten together just before leaving home and determined that the little bag and the pearls needed to be included in some way in this momentous occasion we would be engaged in, together, on this historic night in Washington.

If you're wondering why my face was so colorless in those photos of the event, I'd cried away my makeup hours before -- and my appearance was simply of no concern.

A few hours later, I would stand at that lectern with my great-grandmother's picture in my breast pocket, holding my notes in one hand and Aunt Emily's lovely gift in the other.  Inside it would be the blessed-by-history little pearls and the presidential seal that had been quietly slipped into my palm by the acknowledged Leader of the Free World!

I needn't have doubted that.

Somehow the importance of legacy had been transmitted, and from this day forward it will go on with Leontine's descendants, despite the distractions of whatever the future holds ... .

I've returned both the items to their proper owners, but have kept the commemorative Seal for just a little longer ... .