"Every time these cyclical periods of chaos arise, the opportunity to re-define Democracy rises with it ... ." 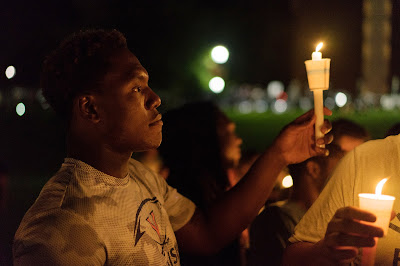 It is then that we gain access to the re-set buttons, and the time comes when the platform is re-created upon which the next generation of newly-minted Americans will stand as they assume the responsibility of forming that "more perfect Union."

We're now at another such time; a time of generational change.  They've been occurring rhythmically since 1776, and each such period has led to a higher rung on the upward spiral of this ladder of the great American Experiment.

I'm awed by the newly-emerging young people now surfacing courageously and defiantly.  They're turning up everywhere and in some of the most unlikely places.  Some of them have found their places where it counts -- in the media, in government, in the legal professions, as educators, and they're eloquent and daring.

And, it is We who are the Leaders we've been waiting for; those who have lived long enough to be able to bear witness to a past of earlier victories in the long struggle against injustices and inequities. Look around you.  We're here.  We may not look like the image in our heads of what leadership should look like; we're old and infirm in some cases, but were still kickin’, still viable.

We're wearing whatever the skins we're in proudly, and without apology.  We're scruffy and denim-clad (but that's now been usurped by the invaders who've come out from under their sheets), and so varied in racial identity by now that our race is fast-becoming little more than a political choice, but that's less important with each day that dawns.  Some of us even find ourselves among the unlikely class of the "privileged," and who'd have ever believed that?  It would not surprise me to run into those I met at Telluride at the MountainFilms Festival last year, those with the time and the financial resources to bring to the great changes now needed by the rest of us.  Everything's up for grabs.  The Democracy is on the move, again, and this time we're taking giant leaps toward a more ethical and moral future made possible through advanced technology.

The animated debates are being conducted -- not on Public Television -- but on the cable news channels, in the unlikely voices of folks like James Murdock, owner of the Fox News Channel -- arguing against the presidential outrages, and for the taking down of statues of the defenders of the Confederacy!  Those unscripted panels responding to the outrageous pronouncements emanating from the White House are unprecedented in their candor.  The masks are off.  The painful and formerly ill-formed festering boil of centuries-old White Supremacy was finally lanced indelicately in full public view and now we have only to wait to see if the poisons can be contained before their destructive diseases have the power to destroys us all.

I say, there's little that's new here, except for social media.  Those of us who have been marginalized for centuries, whose stories have been muted, expropriated, or silenced altogether, have lived into a time when the masks have been pulled down and the awfulness has become visible to all.  There's no place left to hide.   And we've lived into a time when the price paid for those omissions in our history books have produced a generation of Americans who truly believe that this nation was formed by and for them -- the White Christian -- and there has been little evidence to tote out to refute their claims.  They've been allowed to believe that "Humankind" is generically white, and that the rest of us are exotic,  "sumthin' else", to be related to custodially.

This defines the fundamental failure of our system of public education.

There is still denial from high places such as that displayed in the voices of the Joint Chiefs of Staff in all their uniformed and be-medaled glory expressing outrage with the words, "... our values were firmly established in the year 1775, and ..." without including the fact that those Armed forces resisted racial integration until the year 1948!   Or any recognition that among those defiantly and proudly marching in that Tiki-torch parade chanting"Jews will not replace us!," were many returned veterans of the wars in Iraq and Afghanistan!  Until we've begun to exhibit a willingness to share our complete history, there will be lingering skirmishes to get through, ... but one day at a time ... .

Every sign that I've seen over the past several days would suggest that we far outnumber the Neo Nazis, and that their desperation -- so clearly evidenced by their armed presence in our midst -- is going to be defeated.  Their obvious motivation is based in fear and hatred, the last dying gasps of the Confederacy are being heard in angry shouts, but also in tragic and petulant whining ... "so sad." Is there a more perfect way to describe His Orange-ness? 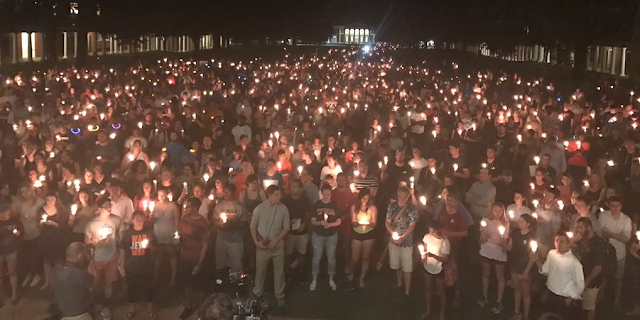 We cannot hate them out of it.  That's a loss cause.  We can only make them irrelevant by refusing to allow ourselves to waste energy fighting against bad ideas.  We must replace what they're expressing with better ideas.  Meet across town in huge numbers in Unity Festivals!  Have our artists, poets, musicians, orators, come together and raise their voices in Love and Hope.  We've done it before.  We brought down a failed presidency and ended an unpopular War in another surge of change.  We can do it again.

We must not be cowed nor discouraged by this last gasp of what history will someday define as the feckless Age of White Supremacy.  Humanity cannot be sustained under such an erroneous assumption, because that will take us all into the planetary realities that can no longer be denied, but that must be faced now for the sake of human survival.

I will join with others (in civvies, of course) over this coming weekend in Berkeley, San Francisco, Richmond, and wherever else another voice is needed against this most recent threat to our country.

See you at the Festival!