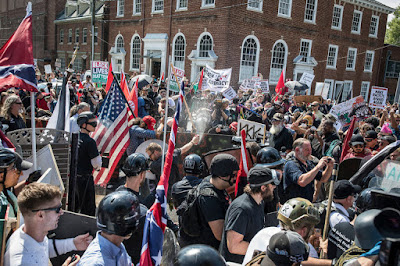 Perhaps it's this dreadful cold that I've been host to for the past several days.  Maybe the doubts have been creeping up over past weeks ... and I've failed to notice 'til the wrestling with these painful coughing spasms that are not yet subsiding.  But whatever the reason, I've rarely felt more confused and bereft than over the past few hours when I'm struggling with the need to hold the world off until the coughing ceases, and the need to respond to two calls for my participation in both MoveOn's local vigil in support of Charlottesville's protestors, and, another received earlier in the day for me to "say a few words at Indivisible Berkeley's Vigil and March from Finnish Hall to Civil Center Park in Berkeley.  Both demand answers, and these are my compadres, right?

I'm facing the fact that -- even if my physical condition allowed it -- I'm not certain just what I would say because throughout the day confusion has been building as I watch transfixed by footage coming out of Charlottesville, and pundits spouting their usual bilge that tends to want to assume that they're on the side of the angels, and that there is a (majority) constituency for their view.  But is there?

You see, I believe that we're Morris Dees and Fanny Lou Hamer, Abraham Lincoln and Harriet Beecher Stowe, but that we are also George Wallace and David Duke, and, Steve Bannon and Donald Trump. The trick is to find room on the planet and the nation for us all to find ways to live together in peace.

Maybe the beginning place would be to stop being in denial as to just who we are, and to begin to deal honestly with how we process our national history for succeeding generations so that the legacy is carried over with integrity.  There must be an acceptance of our mistakes and a sharing of lessons learned, generationally, so that our democracy will continue to serve as intended by those imperfect white men who conceived it for those "like them."  That's a tall order, right?

It was with a jaundiced ear that I heard the eminent Senator Orrin Hatch indignantly come down hard on the thugs in Charlottesville with the statement that his brother, who was lost in WWII fighting Hitler and the Nazi, in a war to save the democracy that was fought with a segregated Armed Forces!  It was a war that cost 54.8 million lives, worldwide, and the contradictions have never been included in our history books, nor in the national narrative. 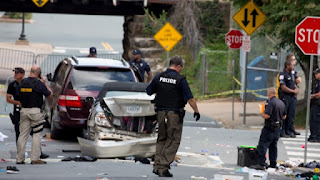 In watching those young thugs -- they were expressing the worst of us -- true, but they were also exhibiting what happens when we've denied our essential truth in favor of an unsustainable myth that serves no one:  The Myth of White Supremacy.  Their expression of entitlement is now being exhibited with the symbols born of those with whom we fought 70 years ago.  What we've allowed ourselves to believe is that we are the saviors of the world, and that this justifies whatever we do that serves this self-deluding image. And that image is undeniably "white".

What in the world are those of us who deviate from that mistaken national image to do with that?  I've never been able nor allowed to be a part of that "We."  As our diversity is embraced and grows, the generational changes will shift, and become more true, I believe that.  It is this belief that sustains me in my work.

Many generations of living with slavery, Jim Crow, inequality in most areas of civic life, has ingrained in us the idea that White means power, and that in order to gain that power we must learn to emulate the behaviors, ethos, attitudes of those who have established themselves at the top of the food chain, but deep down we know that we bring with us differences needed for balance in a nation still forming in this grand experiment.

To the extent that we are successful at retaining that which is buried deep in our DNA; our basic humanity-- and can combine that with the gifts brought in by other world cultures, we can refresh and revive the American Dream so that it retains its vibrancy for generations to come.

Meanwhile, in the words of the late Dr. Martin Luther King: