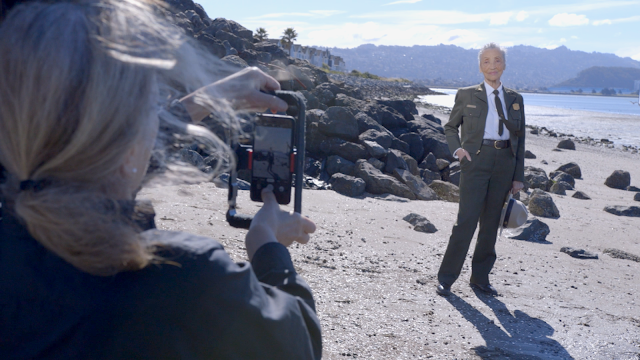 Another wondrous day ... beyond my wildest dreams ... .

On Wednesday, May 22, 2019, I was photographed by the great Annie Liebovitz, and what a day it was!

The car picked me up at around 8:15 that morning for the short drive to the Visitor Education Center of our Rosie the Riveter/WWII Home Front Historical National Park.  I'm taking the time to type this in as complete detail as possible in order to convince myself that it really happened.

After a brief greeting with this gracious woman, we were driven to a point on the scenic Richmond shoreline where I'd never before been.  This magnificent background is a mere 5 minutes, walking, from our Visitor Center. It is dramatic; unexpectedly beautiful, though anywhere along the Bay Trail can be surprising and wilder than one might anticipate.  The rock formations, though probably landscaped beyond what might find in a more natural state, are nonetheless beautiful and convincingly random.

This site would have served during WWII as Kaiser Shipyard II, where some of the 747 ships were built and launched in 3 years and 8 months. An achievement that helped to bring the war to an end by out-producing the enemy.

That history came alive for me on this day, alive in ways previously dimmed by time ... . 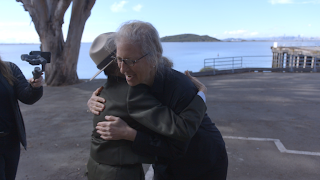 Fortunately, Bryan Gibel, producer/director of the upcoming documentary,  "Sign my name to freedom" came along to photograph Annie and me at work.  Depending upon what gets left on the cutting-room floor, this just might make it into his film.


I have no idea when this work will be published, or, what is its intended use, but at this point I can't say that I very much care.  It was the experience of meeting Ms. Liebovitz -- and "disappearing into the art of another" that sings to me!

She is on an assignment for Google (I believe) using the Google Pixel 3 XL, photographing men and women who are "having an impact" in their time (according to Blaine Edens of Soapbox Productions).  She'd come from a shoot at the Museum created by Bryan Stevenson in Montgomery, Alabama -- where the history of lynchings is memorialized through those unforgettable heart-rending sculptures.

I'm hoping to visit there someday, and at the rate things are going ... .

Can you imagine that not happening?