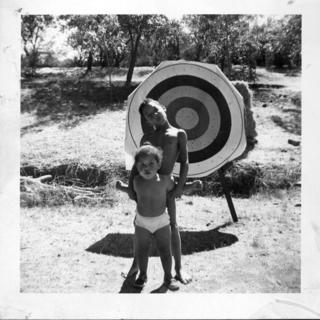 Thinking about one of those periods in time when there was just enough absurdity to keep life in perspective when all else was precarious and beyond personal control. It was a time when Bobby and David were still very young and when the neighborhood children had broken through the social barricades and were spending much of their time playing in our driveway. Their curiosity won out over whatever prohibitions had been placed on them by adults, and the sounds of play had echoed out of our yard all summer long.

I believe that David was not yet in kindergarten when Georgia Wiseman came to work for us. Despite her very Jewish name, Georgia was a tall energetic African American woman who served as both cleaning woman and great friend to this rather lonely young mother living in hostile country. Georgia came on Tuesdays and Thursday every week and handled the bunch of us like the "professional" that she was. She was with us not only through those critical years, but -- after my first marriage failed -- years later, she came back to work for us for several years in the Berkeley home shared with my second husband. My kids were all grown up by then, but Bill and I were both employed by the university. Ours was an enduring friendship.

I can feel my throat tighten when I remember the day that we learned that Dr. King had been killed. It happened on a day when Georgia was not due to work. I was devastated! I was alone in the house. There was a knock on the door around ten o'clock and there she was. "Thought I could catch up on some ironing," said she walking past me with tears flowing. She'd driven over 20 miles from East Oakland because she felt needed. This was Georgia Wiseman. She knew that I would be sad but also frightened. 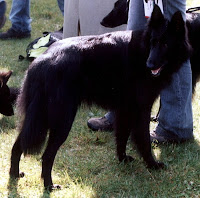 But that was also a time when a beautiful black Belgian Shepherd moved into our lives. He turned up one morning with a stone in his mouth. He greeted me when I opened the front door, front legs down, hips high and tail wagging. The signal was clear. I picked it up and threw it as far as I could. He dashed off and located it easily and brought it back for a re-toss; an endless game that went on for weeks. When I could toss no more, he'd lie down on the deck and wait for the boys to leave home to board the school bus down the road. He walked them to the bus -- and greeted them each to day to be escorted home. He'd adopted us. Had no idea where his owner was since there he was until late in the evening when Mel drove down the driveway to be escorted up the stairs into the house. I was careful not to feed him for fear that his (unknown) owner would think that I was trying to steal this lovely creature. It went on for weeks. He would arrive early each morning as if to his "job," staying until Mel checked in each night.

After some weeks, the mystery was solved. One of the neighbor children was overheard calling the dog by his name, "Nig!" It was Georgia. Of course, it was impossible for the owner to call him home. How on earth could he/she stand at the edge of our property calling out " Here Nigger!" It was preposterous. It was also very funny! It was also a problem.

Coincidentally, at the time there was a construction job underway in front of our house -- pipe-laying of some sort, in deep trenches -- with workmen from the utility company (both Black and White) spending much of the day digging and pounding with their machines. Here they were working in front of a fine  home obviously owned by an African American family who owned a big black dog named "Nig." They could hear the childrens' voices calling out his name as they played. How could this be?

Georgia could hardly stand it. She finally insisted that we have the children use some other name. Only problem with that was that I couldn't find any sensible way to explain to my little ones the reason for doing so. Nig was simply the name of a creature they'd grown to love and at the time the word had no other meaning. Would he even respond to any other? My kids weren't familiar with it, and the other children were probably equally as innocent. These were really pretty young children. Georgia's embarrassment at being the housekeeper for such a family in plain view of the African American workmen was unbearable. She ceased to see the humor in the situation after a very short time.

After some weeks, I finally caught a glimpse a young woman across the road in front of a tiny rented cabin. Nig was standing beside her. Walked over and introduced myself. She moved quickly up her stairs as I arrived and was now standing behind a closed screen door. She was not unfriendly, but not very responsive, either. I told her that I was concerned that her dog was not being fed, that I'd not known where he'd come from or how to report our "find." Told her how much we loved him but wanted her to know that we were not trying to steal him. Made no mention of his name.

She told me that she'd recently moved from a ranch where there had been children for Nig to tend, and that, since moving here, she had accepted a job that kept her away from home much of the time. He was lonely for a family to tend. She was sorry if he'd been a burden to us ... but that she was planning to move soon.

We lost Nig. We never did manage to work out a solution, but we had one happy housekeeper when Nig moved away. Then we went back to laughing at the absurdity of it all!

It was then that we found a reliable breeder and bought Helsa, a German Shepherd pup, who quickly healed the pain of losing our cherished friend, something I'm not sure would have happened without the experience.

What's in a word? I'm not sure, but I suspect that some of the toxins may have been removed for my little ones -- if they can remember... .


Photo: Bob with Dorian under the big oak at our home in Walnut Creek.
Posted by Betty Reid Soskin at 2:49 PM