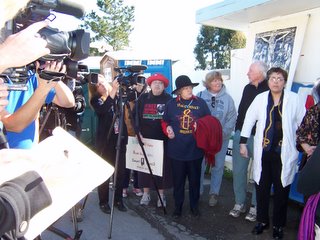 After months and years of braving the cold and the jeers of the non-believers, word came last night after a 24-hour postponement that the anesthesiologists slated to assist in the execution by lethal injection had resisted the call in the final hours and refused to participate in the killing of another human being. There was not enough time to find replacements and the entire question of death by lethal injection is now up for re-examination. The next state execution cannot be carried out until May, at the earliest. The moratorium bills may have been heard by that time, and the debate is now fully on.

Strange that it was only yesterday -- after months and years of trying to form my thoughts into words -- that it all came together. I've always felt that I was rambling when a mike was pushed into my face and I was expected to deliver some rational defense of my position on the death penalty. I knew it was wrong -- and heaven knows there were enough generic cliché-riddled statements to borrow from, but I couldn't seem to find my own words and thoughts that were succinct and true for me. On Monday I did. I opened my mouth and they fell out as clear as a bell.

Newsman: "What about the families of the victims? Don't they have a right to closure? Wouldn't you want vengeance, too?"

Me: "Of course I would. I'm as human as they with the same wish to have the offender torn limb from limb in the event that a member of my family had been similarly brutally murdered. But I'd be fortunate if I lived in a society that would protect me from myself -- and my immediate demand for retribution which is little more than a permanent answer to a very emotional but temporary state of being. When sanity returned I'd know that nothing would bring my dear one back to me -- and that widening the field of violence would serve no one, but would only increase the hatred in the world and make us all less safe. Lock the offender away for life to protect us all from further harm. That would suffice. To participate in the killing serves no purpose save vengeance -- and we've surely evolved beyond that."

Tomorrow I'm one of the speakers at the Forest Service Black History Celebration at Mare Island. Will take along my little DVD and wing it -- as always -- depending upon the ability to pick up signals of interest and acceptance from the assembled group. It will be great to not be distracted by the death penalty question.

This evening I'll meet with Barbara Becnel to talk about the newly-discovered evidence that appears to support the innocence of the late Stanley "Tookie" Williams, executed by the state in December. We'll have dinner and catch up on events. She's been to Venezuela for a world conference since last we talked. I've not actually seen her for more than a year. Only since Stan's death have we again been in direct contact.

Now I'm off to pick up Dorian at NIAD and then back home to wash blue jeans and match socks or plan to stay in bed next week for want of clean clothing!

Photo: This is a typical press conference at the East Gate of San Quentin. These women are a part of the larger group just off camera. All of the networks, channels, radio stations are present and hoping for news -- someone being arrested in an act of civil disobedience. One of these women crossed the line and was taken away a few minutes after this photo was taken. The woman in the white coat is a local physician.