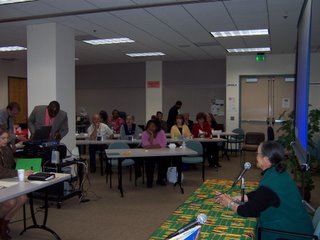 First let me tell you that the film -- "Farallon Light" -- arrived yesterday -- two copies on DVD as promised. The images are clear but there's a red cast to the film. The narration is clear. No scratches are visible. The woman at the film library that processed it told me that they'd used a kind of gel that helped to mend the flaws created by time and overuse. I could hear every word. The music, however, sounds garbled and my voice is "trembly" and "wavy" with the lyrics almost impossible to understand. But -- all-in-all -- it's a beautiful documentary that I'm very proud to have been a part of. I know what I'm singing about -- and because I do -- I just fill in the inaudible and slushy parts for myself. What a wonderful thing to finally own... .

And, today I drove to Mare Island in Vallejo to serve on a panel with two others in a three-program, three-day observance of Black History Week for the U.S. Forest Service. It went extremely well, I think. I was second on the program, following a very informative presentation on the Buffalo Soldiers by a National Parks Ranger; and followed by Daphne Muse, poet and historian faculty member from U.C. Berkeley and Mills College, author of several books that includes a beautiful collection of poems for children written by black poets; She is also an authority on the late Ms. Rosa Parks who spent a week as a guest in her home in Oakland at one time. Wonderful stories ... told well.

Am becoming more comfortable with my role as a speaker at such events -- and also with my status as an elder with a history to share. As I grow older and wiser (yes), I'm finding that my story is fairly universal, and that others tend to recognize themselves in them.

Today was a very good day.

Tomorrow I'll attend a workshop on economic development opportunities opening up in Richmond. It will bring State Treasurer Phil Angelides, CalPERS investors, and his staff together with those seeking state funding for worthy projects. The Park will play a role in the historic preservation of some of the structures now dormant by partnering with local non-profits. That will end in the early afternoon and I will head immediately for Mendocino and a weekend of quiet and reflection. First, though, I will again see Angelides at a Saturday morning breakfast fundraiser in nearby Fort Bragg. We're in the beginning phases of the governor's race in the California Primary and Angelides is one of three prominent candidates (the others being present governor Arnold Schwarzenegger and former EBay executive Steve Westley). There's one more name -- not yet announced -- that I will support through the primary, but that news must wait until after the weekend. She will announce in the next few days. Suffices to say that we spent the afternoon -- after the Mare Island gig -- sipping tea at the Point Richmond Starbucks and talking strategy ... .

Photo: Speaking on the subject of African American Homefront workers during World War II -- before U.S. Forest Service employees as one of 3 panelists.
Posted by Betty Reid Soskin at 6:09 PM