About ten days ago I received a call from the daughter of a dear friend announcing that her mother's 80th birthday was in the offing and would
I like to fly down for the big weekend family gathering as her guest? "Of course," says I, never dreaming of what was ahead. Travel arrangement arrived by email a few days later that had me scheduled to leave on Friday on the 2:50 pm Southwest Airlines plane due at John Wayne Airport in Orange County an hour and twenty minutes later. All went as scheduled.

About 45 minutes after a very surprised Charlotte (she didn't have a clue) arrived with Susan to pick me up and I found myself entering wonderland; the RitzCarleton San Niguel on the beach in Laguna Hills! The next two days were straight out of Paris Hilton country, with opulence and luxury of a kind this little ole lady hadn't witnessed except as shown from a movie screen in a movie starring the dazzling Charlize Theron. All that was missing was the proverbial red carpet. They probably keep that rolled up until Nicole Kidman's arrival is anticipated.

Fancy dinner in "The Grill" was followed later by "tapas" and desserts served on the fourth floor, only accessible for we who held keys that were slipped into a slot in the elevator floor indicator to be delivered -- with crystal chandelier even in the elevator 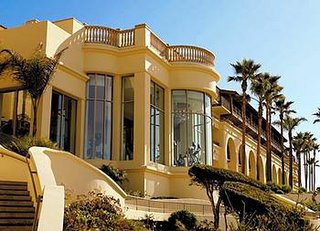 -- to heaven where they keep chocolates and custards and toffee and, coffees and exotic teas, a fireplace to gather 'round, and flowers everywhere .

After several hours of playing "Dorothy" without Toto, after taking a shower and slipping into a luxurious white robe and slippers (hotel provided, of course); and falling into a bed (one of two) high enough to require a step stool then dropping into a down-covered mattress and drawing up an exquisite pure white down-filled douvet -- leaning against five (counted them!) five pillows of differing softness, we watched "Rent" on the large flat-screen television on the wall.

Read through the brochure supplied by the beauty salon on the first floor -- my hosts invited us to get a massage or a facial if we wished. The brochure listed the only facial that interested me ("immediate differences noted') at the cost of $200. Now that's decadent! Just reading the words was sobering enough to get me back in line. I suspect that this could cause a complete breakdown in one's value structure -- a week or so of such exposure to the good life and I might begin to see all this as an entitlements and begin to be concerned about "the little people."

But it wasn't to be. After the festivities with this wonderful family of warm and loving friends, I boarded my plane for the return to the Oakland Airport on Sunday -- miraculously remembered where I'd left my car parked in Economy Parking far from the terminal -- and drove home. (Almost fainted when the parking attendant presented the $48 parking tab!) After I reminded myself that I'd seen a brochure that gave the starting costs per room at the hotel as $892/rm/per day -- and this because it was off-season --, I figured I was about as lucky as anyone could be. It didn't take long to reach my modest little condo on the northern end of Richmond, and to remember that I'd promised to drive to San Quentin tomorrow for another round of protests against this third execution in as many months.

Read Nadine's email report on her trip to New Orleans with Downs Memorial Church group and was so proud of my young friend and the others who'd spent several weeks helping to de-construct homes no longer livable in an environment of death and decay. Everything fell into line again. Having contributed modestly to her travel expenses (only $2 more than my parking tab), this felt really good to me, as if I, too, had helped in some small way. It's all relative.

I'd had a weekend glimpse of another lifestyle. Spent some time learning about the exciting work being done by the young family whose guest I'd been -- unimaginably futuristic projects involving the design, engineering, and construction of towns -- quite literally. Experimental small cities situated in previously uninhabited areas where training scenarios, re-enactments, problem-solving laboratories for all kinds of enterprises are tested and carried out. It was a glimpse of tomorrow, and I was jealous of their ability to extend into time in ways no longer open to me. I could understand that the economic structure of their lives was far beyond what I have the ability to imagine. I was grateful for their having included me in their wonderland -- at least for a time.

But yesterday found me back at the Gates with the others; predominantly Unitarian-Universalists from social action groups -- and it felt right. Learned that my friend, Barbara Becnel was expected to join the demonstration later in the evening but I wouldn't wait for her. I'm just not capable of being that close to the actual execution in the cold dark night. Much prefer doing my protesting in the full light of day, when the helicopters aren't droning overhead in the blackness -- trying to drown out the speaker's bull horns. And when I won't have to hike the two or more miles on that desolate road to the East Gate. The prison places barriers along both sides of the road for that distance to make the trek as forbidding as possible -- no sidewalks and no street lighting -- only flashlights, if you remembered to bring one along. Then there's the awful walk back in the blackness, when you know that the awesome deed has been done and that none of your protests effected the killing ... .

No, it's far better at noontime when there are only the news trucks to contend with and the knowledge that, again, you may show up on the eleven o'clock news, an hour before another life will be taken in your name.