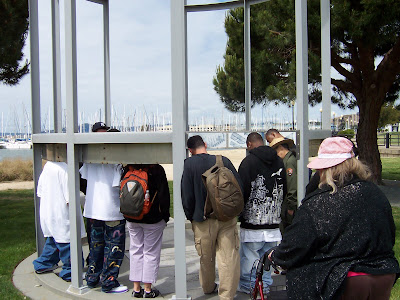 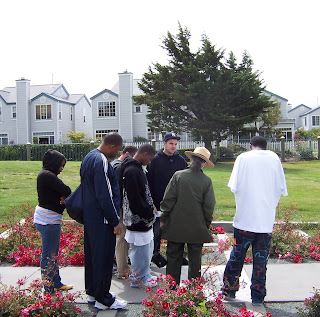 Noticed in transferring photos from my camera onto my hard drive -- this series showed up ... .

Earlier this month a teacher from the local adult school invited me to speak before her class. These were young people, ages of 18 to 25. Most were studying for their GED and in most cases had dropped out of school long before completion.

This would be the second visit to their classes for me, and I wasn't all that sure how successful the first visit may or may not have been. It's often hard to tell with this age group.

There is also the problem of relevance. Just how much interest was there really in World War II among today's youth? There have been many wars since that time, and each with its own stories. This one was now 67 years old and most of those who fought or worked in that effort were now gone. We're talkin' grandparents generations here!

A few weeks ago I took along my little DVD of "Lost Conversations," some literature about the mutiny at Port Chicago; brochures on Rosie the Riveter WWII/Home Front Historical National Park (phew!) and gave it my all. They seemed interested enough, though it was hard to tell how much I was getting through with my stories. After all, how would young people -- who in many cases came from single parent households headed by women who've had to work all their lives -- relate to the stories of Rosie the Riveter?

I tried holding eye contact with those who would accept my gaze but with minimal success. The two teachers in the room were probably my best audience, sadly.

At the conclusion of my one-hour visit I invited the class to come to the Rosie Memorial soon where, perhaps, I could make the stories more real and where they could see the "swords into ploughshares" transformation of Kaiser's Shipyard II into what is now a fine shoreline housing development and city park that holds this very moving memorial to the women who had entered the nation's workforce for the very first time. It felt as if I were reaching a bit in extending the invitation -- as if -- with a bit more time the message might get through ... .

A few days later their teacher called to say that the young people really did want to visit the memorial and would I meet them there for a continuance of our WWII experience? They would have to board two city buses in order to get there, but that she'd love to have them do that if I could arrange a time.

Two weeks ago I arrived at the Memorial at precisely ten o'clock as planned to find that they'd preceded me and were eagerly waiting for whatever was to come next. This morning in sorting through photos to add to my collection, I noticed how deeply engaged they were. They were totally present in the moment. I remember how moving it was to me to walk with them the entire 433 ft. of the memorial (the length of a Victory Ship) while individual students volunteered without prompting to read aloud for the group each plaque that was embedded in the time line set in concrete - a time line telling the story of the mobilization and the home front effort of Americans to defeat the enemies of Democracy. The reading was halting and the teacher occasionally pushed through when a word was misread -- but there was no embarrassment. The content completely erased any fear of failure. Amazing! The experience of these young people who lived in this city but who had little or no information about its history to date was exciting to everyone. It was a privilege to participate in their discovery.

When I got back to my office later it occurred to me that this experience could be extended. Next month we'll make the trip out to Shipyard III together to tour the SS Red Oak Victory with one of the men who is volunteering in the restoration of this -- the last of the victory ships built in that shipyard in 1945. She sailed as late as the Vietnam War before being mothballed at Benicia then donated by the Navy to the city's Museum of History.

Whatever made me think that young people in baggy pants and caps on backwards sporting gold chains and fancy sneakers with Hip Hop as their credo couldn't be stirred by something as mundane as local history?

I don't think that -- at the time -- I was aware of just how truly engaged they were. These snapshots are wonderful to view after the fact. I might have forgotten ... .

Quite affirming, really. Something to review on those days when I'm feeling less than effective -- and old.
Posted by Betty Reid Soskin at 12:46 PM