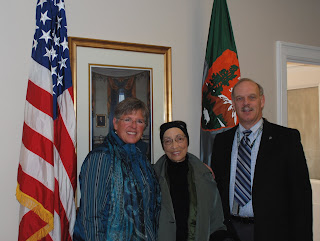 The last day of the Grand Adventure ...

There is no possible way to describe the past week's events and communicate what it was like. You've read all the obvious things already, of course. CNN, MSNBC, and the New York Times has covered it all. Never has an event been so completely reported. What more can be added? Except, that is, what my experience was like and what it meant to me. And, having said that -- how on earth can I ever get all that into mere words?

But I'm reminded that "words" are all we have, really, and an important part of my experience involved the utterance of no more than ten sentences that were returned to me yesterday in a PodCast that would surely deny the ineffectiveness of "mere words." 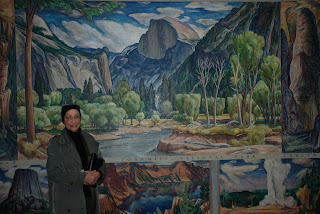 On Wednesday, the day after the ceremonies at the Capitol, Martha and I visited the National Park Service headquarters at the Department of the Interior. It provided an opportunity to see the heart of this huge system of parks, monuments, historic sites, and wilderness areas and to meet those who are the senior planners and administrators for the entire system. It was amazing!

During a visit to the public relations department a young woman entered the office to tell us that they were working on a PodCast of very brief interviews of park staff that would express reactions to the Inauguration and the NPS's participation in all that occurred. She asked if I would be willing to say a few words for their camera -- to add my impressions of the experience for their piece. Of course. With that she ducked out and returned a moment late 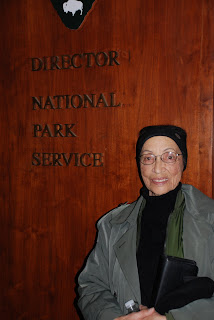 r with her equipment and -- in a matter of no more than perhaps ten sentences -- twenty at most -- I said my piece on the fly. No planning. No rehearsal. One take.

Yesterday I received a link to the NPS website where the completed PodCast has been placed with access to the entire NPS system. I was stunned!

Those "ineffectual" few words had been transformed with dramatic images that brought tears! It is beautiful, and true, and real, and wholly the work of creative and imaginative skilled technicians. It will be available at some point perhaps on the public NPS.com pages. When I have the proper linkage I'll post it here. The title is The National Park Service - "Where History Happens."

I will never again underestimate the power of words nor the ability of media experts to interpret them with such sensitivity.

Tomorrow I'll try to begin to describe the week and what it meant to me -- this time with more of Martha's pictures to illustrate and the words that are beginning to form themselves in ways that just might do justice to the experience. After watching that lovely piece, I'll never again underestimate the power of the spoken word when enhanced by appropriate images.

I must; for my family, at least.