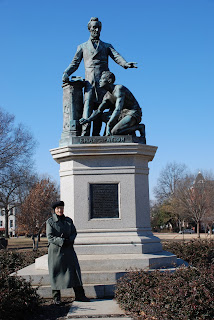 Several weeks before we were scheduled to arrive in Washington ...

Martha managed to secure a small basement apartment for us to rent for our 4-day visit. It was just about a mile from the Capitol in reasonable walking distance. It wasn't sheer luck but required some diligence on her part to find a place at a time when there were no hotel rooms left between Washington and Baltimore! It was located on East Capitol within the District of Columbia and was just a block away from Lincoln Park where the Freedman's statue as well as that of the great black educator, Mary McLeod Bethune were located.

The Freedman's statue was new for me. It was commissioned and financed by former slaves to honor Abraham Lincoln. The campaign was launched by a woman wh 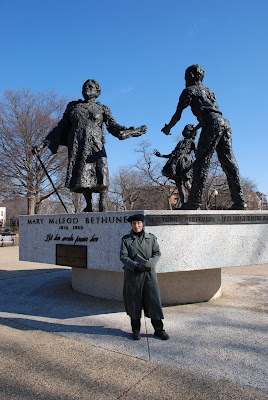 o contributed the first five dollars that she earned once emancipated. The plaque is so moving (see below).

I've now lived long enough to have memories that include encounters with iconic figures who are now a part of history. Mrs. Bethune is one such.

I remember being a teenager when she visited Oakland as a guest of a church group or PTA (I'm not sure which), but I recall hearing her speak at the Highland elementary school auditorium in our neighborhood. All I can recall of that day was that she looked an awful lot like one of our neighbors and that she wore a big hat and had a booming voice. I can hardly imagine that one day I'd be standing before this great sculptured likeness in awe of her contributions to black life.

It is the same way that I remember hearing the late great Langston Hughes read his poetry in that same humble setting. Can't remember that I was all that impressed at the time, but then how in the world would I have known that I was listening to greatness? Makes me wonder who among us today will be memorialized one day in statuary and murals 80 years from now? Angelina Jolie and Brad Pitt or Steve Jobs and Maria Montessori? Could be. 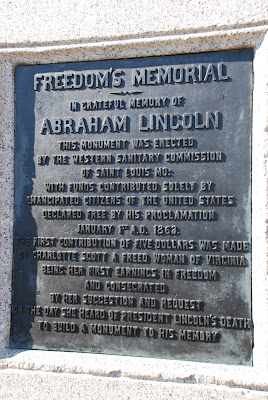 In preparation for the trip I'd picked up a portable DVD player and a copy of the 7-hour video of John Adams; the HBO documentary. I intended to watch it on the flight in preparation for witnessing the Inauguration ceremonies. I wanted to prepare myself for this adventure in every way possible so that it would be as meaningful as I could make it. Heaven knows there's enough information in every form so that there was no excuse for not being prepared. What little I knew about the life and times of the founding fathers had atrophied over time, and I was about to witness the inauguration of the 44th president of these United States, and needed to know what that means in relation to the original intent of those men who laid the groundwork for this progressive, inventive, colorful, painful, dramatic, and sometimes horrific history that I am so much a part of. John Adams might be key to that understanding. It worked magnificently. I watched succeeding chapters each night at the end of long days of museum and gallery visits ... and, of course, on the night after the Inauguration. I felt that I pretty well understood the intent and the process before falling asleep exhausted but ecstatic at the end of that memorable day, at least to the extent that one could capture all that in a 7-hour series.

The idea and first donation for this monument was by Charlotte Scott a freed slave from Virginia, who was residing in Ohio. Having heard of Lincoln's assassination, she told her employer "colored people had lost their best friend on earth". She told her employer that she wanted to honor Lincoln with a memorial and to donate the first money for it. Along with the first $5 Ms. Scott had earned as a free woman, the employer forwarded her request on to the Western Sanitary Commission in St. Louis where the suggestion was taken up enthusiastically. The commission then offered Thomas Ball the work for the $18,000, which had taken two years to collect, all from freed slaves. The slave statue was modeled after Archer Alexander, who is said to have been the last man captured under the Fugitive Slave Act.
Posted by Betty Reid Soskin at 8:23 PM