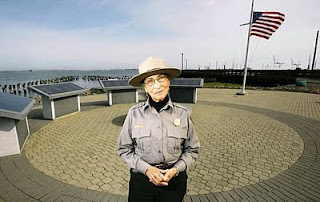 I knew during the photo shoot yesterday that these were going to be spectacular photographs. The man behind the camera, the Chronicle's Lance Iversen, captured so much with such a sense of composition that I could hardly wait to get a look at what he'd seen through his lens. These pictures are classics, and I feel so honored to have been invited to be a part of his imagery.

The most dramatic of these, for me, shows the shadow of my fellow ranger, Thaddeus Shay, captured with the dummy torpedoes that are a part of the monument. He is a stand-in for those who are gone -- but whose presence is still felt so powerfully at the site. 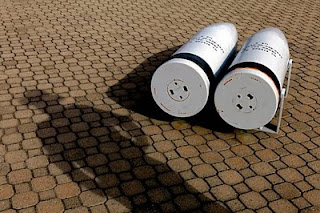 There are 5 photographs with the story. These are my favorites. The reflection of the flag captured by the marble monument against the names of the fallen men excited Lance. On the ride back in the van at the end of the shoot, he was reviewing what he'd photographed -- this was the photo that he seemed particularly excited by. 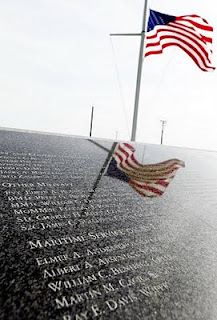 of being able to see with the photographer's eye is something that I envy. Artists like Iversen undoubtedly see so much more than ordinary people do. Before he clicks the camera, he has already seen his picture. And I'm not talking about what is seen in the camera's window -- but before he even sets it up.


I could see his excitement grow as he worked yesterday, and knew in advance that this would be no ordinary shoot. I knew that I'd be grateful for having been invited into his art.


It has been a day of thoughtful quiet.


I worked for a few hours with my friend, Careth "Diddy" Reid, on the E.F. Joseph collection (an almost overwhelming job that neither of us will live to see the end of); painfully, ever-so carefully, separating the thousands of ancient negatives -- is becoming more and more intriguing. Careth's living room has long since become a laboratory of sorts, with packets of once manila packets now stained brown by time - 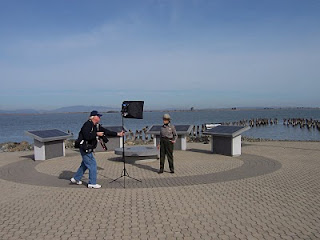 - strewn about. They date from the late 20's through 1979 at the time of this prolific photographer's death.

There is an infinite number of school graduations, Lodge gatherings, church doings, weddings and baptisms, political rallies, sports and entertainment figures, and individual portraits of old friends and strangers who look vaguely familiar but who defy identification. There are the once famous indiscriminately tossed in with the ordinary folks -- but who knew at that time which of these would figure prominently in history? It's one of the joys of age -- the ability to connect our youth with the nation's important stories as they evolved over the decades. It's a bit like glimpsing one's life in reruns.

Then, every now and then, a treasure. This week it was a complete collection of eleven perfect negatives taken at the launching of the SS John Hope at Richmond's Kaiser Shipyard #2 in 1943. Hope was an educator and co-founder of Seneca with W.E.B. DeBois many years ago. Not only are the negatives clear, but we both recognized the participants -- we believe we have Walter and Elizabeth Gordon doing the honors -- he, who later became the Governor of the Virgin Islands.

This has been a week worthy of having yielded at least 10 days within the 7 it was responsible for.

Photos: Do take the time to click on these thumbnails. They're pretty dramatic when enlarged.
Posted by Betty Reid Soskin at 3:24 PM

Happy Veteran's Day! Loved seeing you in the paper!