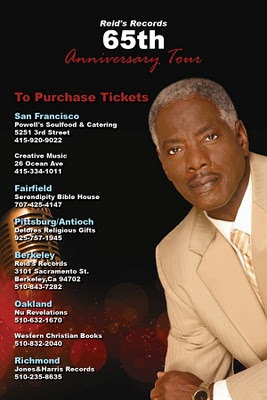 "Oh no! This story could hardly have come at a worse time, Mom. I'm dancin' as fast as I can, and I want everyone to know that we're still viable and going forward!" ... .

That was David calling from a promotional trip to Fresno where he is putting on the first of a series of Black Gospel concerts soon -- as a part of the celebration of this, our 65th anniversary year. He hated being described as one of "the Bay Areas' imperiled small black businesses." David is a long way from giving up, and is carrying the Reid famil 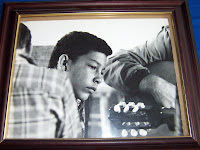 y banner into the next decade with great pride and undaunted enthusiasm. I could hardly be prouder of him than I am right now. After all, struggle is a part of the legacy -- and he's seen plenty of that since he was a teenager watching his father, his older brother, and his mom each in turn -- doin' the hard but rewarding work demanded for survival in the marketplace.

David has 6 Bay Area concerts coming up featuring Lee Williams out of Tupelo, Mississippi, and his popular male quartet, the Spiritual QC's. He's putting all of his resources (read that maxed out credit cards) into an attempt at reviving interest in black gospel music in the valley communities where many of our former African American customers have moved since leaving the urban centers. These concerts are a great contribution to the culture, and returns Reid Records to the forefront of this work that had its roots in the 50's under the banner of his dad, Mel, and uncle, Paul Reid; both long deceased. Those were the glory days of the store, and David is determined to instill new life into that rich world of roots music. 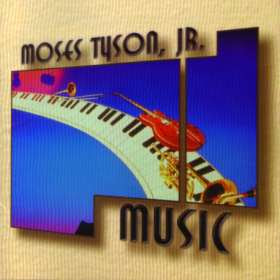 Maybe our son has enough of the genetic attributes of his hardworking and dedicated father -- as well as some of whatever-it-is that Mom contributed to his make up to move him across the barriers into the new age. If so, I suspect that we haven't heard the last of

Reid's Records!
It appears that the rumor of the death of our small black business has been highly overstated. It never was about the money, after all. David suffers no illusions of acquiring great wealth any time in the foreseeable future, His daughter and next in line, Kokee, will one day inherit Reid's launching pad and will make of it what she will (maybe she'll design and sell lady's fancy church hats; "Crowns"!); meanwhile ...

... it was always about legacy, not only of a family, but of a valiant People.

Don't leave us hanging out there, folks ...


Photo: Lee Williams, who is the star of this concert series. The artist I'm looking forward to with the greatest anticipation is Moses Tyson, the greatest jazz organist in the world! I keep tellin' y'all; the best jazz is coming out of the choir loft. Tyson will blow you away! Click poster to enlarge in order to read where tickets can be purchased.