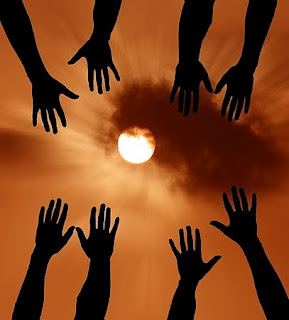 About Marleen; from a casual conversation while waiting in line for tamales and taquitos at the Women's Day of Solidarity ... .

We were strangers. She approached as we waited to snake our way to the food tables. I'd been one of the morning's speakers and -- as is always the case -- was silently wondering just what I'd said and whether it was appropriate to the gathering; improvising doesn't always work and there's little time for anything else at this point.

What started out as small talk ...

"I'm so impressed with you," were her first words.
Something about the way she spoke them invited me to ask,
"why is that?"
I never am quite sure and she didn't appear to be the kind of person who was given to small talk, She might just tell me.
She did, but it was not at all what I expected.

I could hardly speak. There was not the least hint of resentment in her voice; only resignation. The words were simple statements of fact.

By now my mind was reeling -- remembering facts I'd learned while serving as a field rep in all of West County for Assemblywoman Dion Aroner -- words from Ma'at Youth Academy's executive director, Sharon Fuller, an environmental activist on whose board I'd once served. How could I have forgotten? (Recovered these sentences from one of Sharon's reports online a moment ago):

From current research findings: A disproportionate number of toxic sites and polluting industries are located in communities of color and low income areas. More than 245 million pounds of industrial air pollutions were emitted near schools in California. The children attending schools in the heavily industrialized predominantly African American community of Richmond are within a one-mile radius of 355 toxic emitting facilities within the city's 56 square miles.

Marleen had grown up in Richmond. She is a white woman and an environmentalist working with APEN (Asian Pacific Environmental Network); one of the organizations that works hard to raise awareness of the issues and whose lives are passionately dedicated to the cause of environmental justice in West Contra Costa County.

This morning as I talked to the UU congregation in Walnut Creek (the upscale suburbs of East Contra Costa County are separated from working class West County by miles of water shed and scenic rolling hills). I heard myself saying, "...it occurred to me yesterday while participating in Women's Solidarity Day that those women gathered there were activists speaking to one another when those who should be hearing their message -- the policymakers, owners, and executives of those 355 toxic emitting facilities -- live here in the suburbs of the Diablo Valley and in Marin County just across the Bay." There are few if any industrial plant owners living in Richmond to my knowledge.

And it all made sense. As one of the bridges of connection between East and West County, I am in exactly the right place and at the right time to be able to amplify Marleen's voice by a few decibels and bring the message to precisely that population. This could be the message of meaning to the UU church as it is looking for the next directions in their social action planning for the coming year.

Marleen had brought the gift that made it all a coherent whole. The words were not new. The problem has been growing for a very long time, for at least two generations. But in those few minutes while waiting for my paper plate to fill, her story became a beacon. There should have been an aura of light surrounding her because of what I learned in those few moments. Perhaps the only thing new was that her few devastating words transmitted such powerful and disturbing truths with such quiet dignity. No polemics here. She signaled a pathway that allowed me to send them into places where they just might make a difference. Perhaps activist women in the Diablo Valley might be moved to assume the work of raising awareness among their friends and neighbors toward constructive change. She told me that she'd testified before industrial boards and commissions but that she did not feel heard. That, though she'd done many interviews over time, they were summarily edited into 10 second sound bytes and little more. Storming the gates of the refineries has its dramatic effects, I suppose, but human interactions of real meaning -- particularly between women -- may hold more.

By now our plates had been filled with rice, refried beans, and mixed fruit and the decision of just how to manage the grape punch and work our way back to our separate tables had to be made. We set them down long enough to exchange cards and I wished her well. It had all taken but a few moments in time. Her last words to me were, "...I'll not live long enough to see the effects of my work." O how I wish her more of a future than she expects to see.

And on the drive home, I thought of Dorian and her new status as a physically disabled person in addition to her mental deficits -- and despite all -- felt lucky that she is and will be alive into the days ahead. Then I remembered that she, too, is of Marleen's generation ... and that the cases of autism have risen over 600% since 1985.

The Marleen Mosaic is almost in place and order in my head is slowly being restored ... .

Note: This has been a private citizen Betty day, and it felt good to remember that there is life still even out of uniform. I often forget.