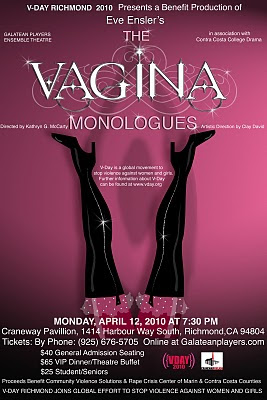 First rehearsal for the Vagina Monologues ...

...and what an emotional ride that was! I'd not had the time to read through the script before today, and though I thought I knew what it was about (having heard Eve Ensler being interviewed a number of times), the powerful words in the hands of a cast as capable of bringing them to life as the women on stage today I was simply not prepared for. It was the first read through, but the strength of the images evoked tears at several points even this early in the proceedings.

It just may be that I'm weary from the muchness of life right now; of the anticipation of next week's commitments; of Dorian's growing impatience with waiting for the next round of surgery and not knowing of what the future brings after her life-changing accident. Corrective surgery on both legs will happen on March 31st.

I've been using my work as a distraction from the incessant worry about how one deal's with life when it careens out of control from the barely predictable to the insane. With the complete breakdown of an aging washing machine without the time to shop for another; when there is the laundry to pick up and deliver each day to Elmwood Rehab Center (now washed and folded thoughtfully by a neighbor and left for me at my front door after she found me in total meltdown mode!) -- not because of incontinence, but because she's just not able to coordinate the urge to pee with the opening of the bathroom door while using the walker, the pulling down of the pants ... and with all that taking too long and the C&A too busy to come when you ring for her -- if you ring for her-- and if she's not busy ... .

Life is no respecter of status, even when one is featured in the national media; is the final chapter in a recently-published book by author Bruce Frankel, (and recommended by AARP); is chosen to receive an honorary doctorate next spring at California College of the Arts, and to give the commencement address; will be honored as one of 3 Women of Achievement by S.F.'s WAVE ceremonies in May; and when one is becoming recognizable in hospital waiting rooms and the supermarket checkout line. All that aside, today I would open another escape hatch. I would be an actor.

Having been the featured speaker at the monthly luncheon of the Historical Society in Martinez yesterday; after attending a retreat with the Friends of Port Chicago on Thursday night; I needed the distraction of something totally unrelated to my uniformed purposeful life. I wanted to play.
Eve Ensler's work is not something to play with. It is an emotional roller coaster.

I should have known.

Have I had acting experience? Not since eleventh grade at Castlemont High School -- and that would have been in the late 30's in the last century.