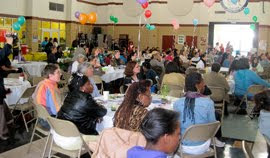 Her name was Marleen Quint, and she neatly pieced together all the disparate bits that I've been struggling with over the past days and made of them a mosaic of reason ...

One might well wonder what the traumatic and life-changing injuries that Dorian sustained have to do with that wild ride back into my Unitarian-Universalist past with Ken Kesey and the Pranksters, and well you might ask ... .

Over the past weeks I've been on a kaleidoscope of mind-bending dreams and images that -- when combined with a pretty exhaustive work schedule have been defying all attempts at making sense. Learned long ago that when confronted with this much stimulus that won't fit into any kind of order -- that I need to slip into neutral and coast for a while. It all tends to sort itself out at some point and patterns begin to come into evidence and sanity returns. A brilliant Jungian therapist once tau 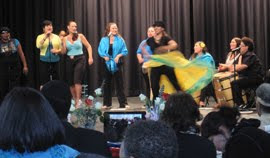 ght me that allowing my insanity is, at times, precisely the way to go. Since Dorian's accident I've been living my life an hour at a time, and sometimes in even shorter increments.

On Saturday I was one of the speakers at Richmond's all-day celebration for International Women's Day where several hundred of the community's women met for a day of singing, dancing, drumming, filmed presentations, and speeches. I noticed at the time that gathered in that auditorium were many nonprofits; activists working for women's rights, against rape, violence against women, rights for women in prisons, Solar Richmond, for sustainable food security, for Haiti, and "Free the Cuban Five!," etc., all communities of need, and that they were in dialogue with themselves. The greater community was not represented in that room, though it was our mayor who brought us together for this wonderful event. Beyond making the observation, I had no idea what to do with it. The thought followed me home, and would not be stilled.

On Saturday evening of l 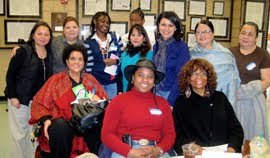 ast week I'd spoken at the Mt. Diablo UU church in Walnut Creek. It was a strange evening in a room where I was more aware of those missing than of those present. This was a church I'd belonged to for about 20 years. It was in this UU community that I experienced the Civil Rights Revolution and the turbulent years that both preceded and followed it. Most with whom those years were shared are now gone, with many markers in the Memory Garden that lies beside the Gilmartin Building. This is where my middle years were spent as a young mother; as a full-fledged black American in a white world; and as an emerging emancipated woman. I returned to live in Berkeley about the time that my first marriage ended and my children left home.

I rarely return to the valley these days. The psychological, economic, and political distances between the suburbs and the inner city community where I've chosen to make my home are simply too great to transcend. Going back to Walnut Creek has some of the feeling of visiting Disneyland, only with mortgages. I've become far more at home with the grittiness, the reality of the inner city where life may be harder, but where it feels more real, and where there is so much to be done that it's easy to make a difference.

I'd been invited by the ministers to return this morning for another round of participating in a workshop created to sort out new directions for the congregation.

A dear friend forwarded an email the day after my talk, a message written by the adult leader of the church's youth program. It said that a few of the teens had been present when I spoke on Saturday and had returned to their group announcing that "Betty Soskin is one BadAss UU!" They then paraphrased my remarks for those who'd not attended (how I'd love to have been a fly-on-the-wall for that one). I printed out the message and posted it in my cubicle. Maybe this is what brought Kesey and the trip to Carmel to mind ...something about the generational divide ... ?

The paradox is dramatic in that my racial and political awareness and activism were developed in the white suburbs where -- for a time -- my entire everyday existence was marked by racism and bigotry, and where I'd found a community within that was accepting of me and my family unconditionally; were willing to learn from us; to bear the pain of my growth at a time when I could have been lost, or forced to alter myself to fit a "norm" of whiteness. My values were shaped by that living experience of being thrust by the times into deep blackness while living in the heart of whiteness. The dramatic contrasts defied logic, but I'm still out in the world spinning off lessons learned while in that community of seekers at a time of unprecedented social change. Friendships formed during those critical years have endured through time and were/are the closest in my experience.

But now let me tell you about Marleen ...
Posted by Betty Reid Soskin at 4:15 PM